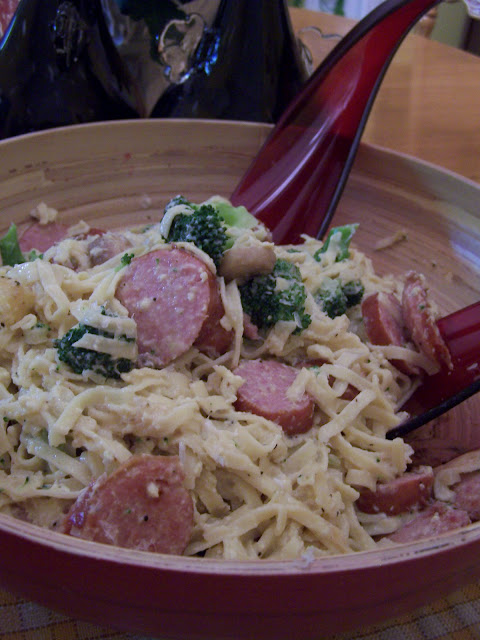 Cookbook #1 (out of over 200)
I realize that I am not the first one to do this, make a recipe from every cookbook they own, but it's a good goal, so I'm going to go with it!

I think I'll add to my resolution that as soon as I make a recipe from the cookbook...I need to really think about how bad I need that particular one, and make a decision to keep or donate.
OR I could just be one of those eccentric old ladies, who instead of cats, has cookbooks to wander thru, around and into when they try to find my body one day. Surrounded by cookbooks.... what a way to go. The Mr. would of course, suggest another way as his "what a way to go", but we won't go there.
Yesterday, we took my son and daughter-in-law to the airport and now they are safely back in Connecticut. Expecting twins, going to grad school, and working. I really am in awe of them, as I find it hard to vacuum AND dust in the same day.
Anyway, I am kind of sad today. I'm missing being closer to family. My sons are scattered and my parents are two states away--in the west, those are BIG states--Washington. I'm just a tad bit lonely. So, what do I do to take away the blues?
Cook something.
I started my resolution/goal of making one recipe from every cookbook I own.

First a funny story about my one son in Arizona.
He does like to cook, but he is just now taking an interest in it. He calls me from the store and said "if I buy a pork tenderloin, what do I do with it?"
So, blah blah blah.... I gave him a recipe with a marinade
He calls an hour later.... "Mom, what does it mean--turn to coat?"
I guess the recipe said "turn to coat" with the marinade.
They always ask me such technical questions. I responded with "WHAT"???
Because when I picked up his 4th phone call in 60 minutes, that is all he said..."mom, what does it mean, turn to coat?"
I had to think about what he was asking for a minute before it dawned on me....we were talking about recipes.

On to my cookbook goal.....
I started with this one: 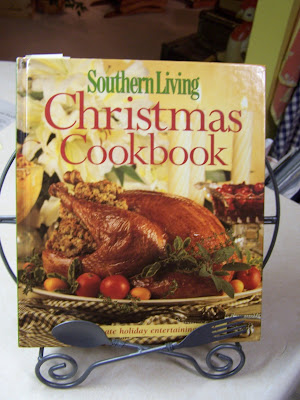 "Southern Living Christmas Cookbook." This one has a 2005 copyright, so it is not to be confused with one of my other cookbooks "Christmas with Southern Living" (2008)
I also decided that I need to cook from my freezer/fridge this year. I have a horrible habit of wasting food, because I don't use it in a timely manner.
I had broccoli in my fridge....I was going to make a veggie tray to have with steaks and baked potatoes when my kids were here, but somehow that got lost in the hectic schedule we all had. The broccoli was only a few days old, so I needed to use it and the recipe that caught my eye was:

Pasta with Broccoli and Sausage.It was good.
The broccoli was crisp-tender and green and the pasta was fresh.
We had only the pasta and some good french bread tonight. I didn't feel we needed much more than that. A salad maybe, but I didn't get around to it.
Also the sausage was reduced fat Hillshire farm.
The fact that we had a fresh green vegetable AND reduced fat sausage made us feel kind of---healthy tonight. (we wont' talk about the heavy cream that went in).
I substituted linguine for the fettuccine, since I couldn't' find any fresh fettuccine at the market today.
The Mr. liked it very much and he is a meat and potato man. His exact words were, "this is really good. Thanks. Some of your experiments aren't."
High Praise! (or a backdoor compliment or insult??)

First you....
cook the broccoli and fettuccine together and drain 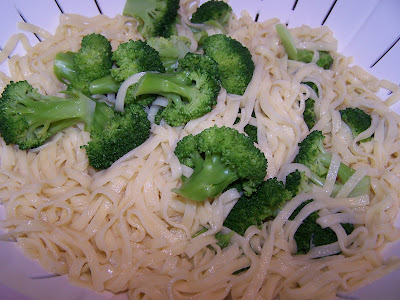 saute the mushrooms and garlic 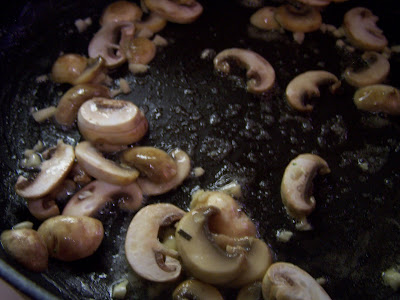 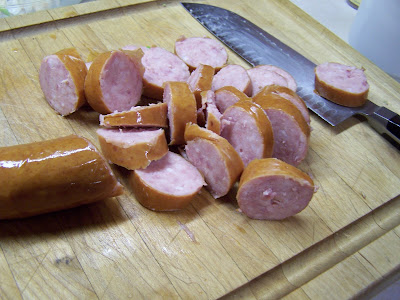 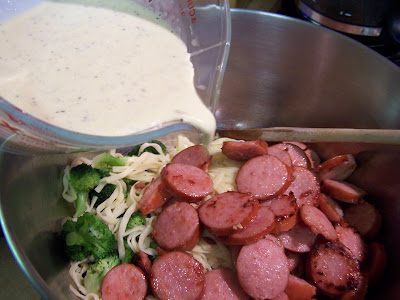 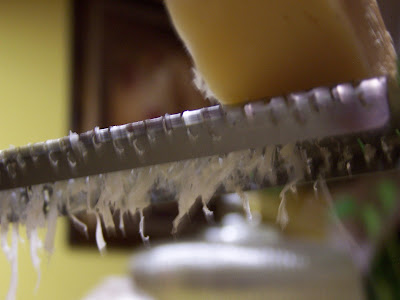 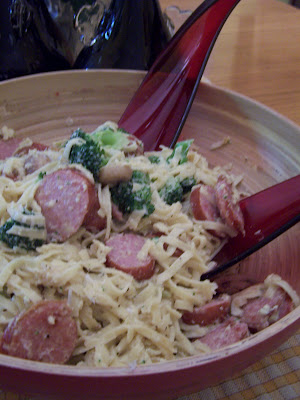 I had to LOL about what your hubby's suggestion might be. I have a feeling it would be the same as Grumpy's!

I have leftover beef stick and croghan bologna in the fridge that I do not know what to do with. First of all, I don't eat it. However, I hate that I may have to just toss it!

I am always on the hunt for smoked sausage recipes. That looks so good. What a great resolution. My dh says if you just would make something out of all the cookbooks you have they would be worth it. Hmmm dont think so,I think they are worth it no matter what. Such a great idea!! Looking forward to it.

My husband loves anything with smoked sausage. I love pasta. This one is going to be a hit. It looks great!

It sounds really good. I wonder if Ben would eat it? I made a low-fat chicken pot pie yesterday for him and he loved it.

Then two hours later he ate a PB sandwich. Sigh!

This looks fantastic! I have the newer version of this cookbook, I guess it wasn't a reprint. BOOOOOO!

Boy that looks REALLY tastey...but how come they always have such complicated directions like: stir, measure, chop....it just makes it impossible for me to cook!!!!

This recipe looks great! I'm sure it's one both my husband and I would enjoy. I love your resolution to cook out of all your cookbooks; that is a goal of mine as well. Sometimes I'm scared to try a recipe that has no picture or no one that has tried it before. I guess that's why I like food bloggers with tried and true recipes (and photos!).
Love the photos of your backyard birds too! :)