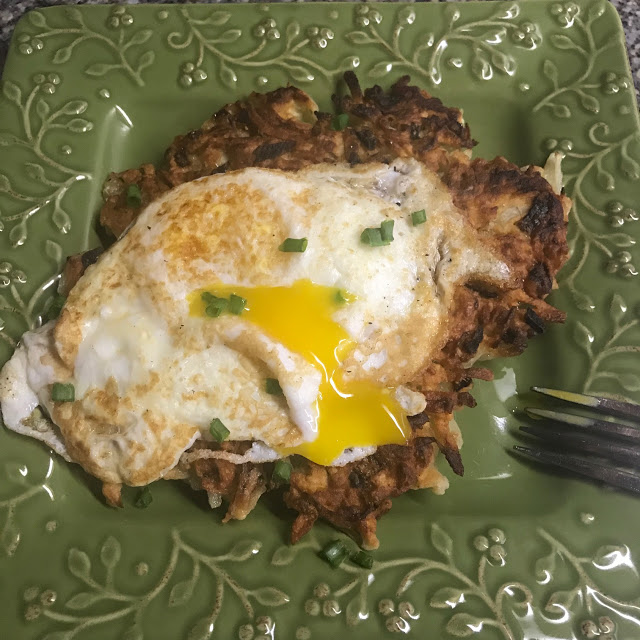 Come with me as I continue to countdown my Friday Friend Cookbook!
What is it, you may ask?
In a nutshell...
About 19 years ago, 50 of my closest friends and family, who had been on an e-mail forum with me, sent in recipes in different categories and we compiled a cookbook.
I decided to count those down!
Why?
Because  one night I was looking thru the cookbook and I said, "I should make every recipe in here for my blog"
The Handyman--who thinks he knows me better than I know myself, said,  "you'll never EVER do that."
Well,  maybe I will!  Maybe I'll show him!

Which brings me to recipe #225
my Potato Latkes 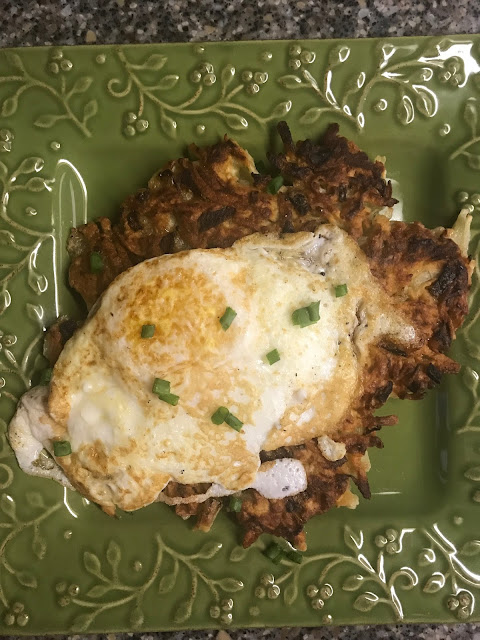 Latkes makes this sound so special, when in reality they are just potato pancakes.
I don't even think I had 'recipe' for them until I had to turn something in to Barb for the cookbook, so here it is:

Preheat oven to 350.  Grate onion and potatoes. Blot excess liquid.  Stir in rest of ingredients and enough flour to bind.  Drop batter into hot oil and fry for 3 minutes on each side.  Drain on paper towels and keep warm in oven while cooking the rest of them.

I like to have these for breakfast with a dippy fried egg on top.

Sometimes tho, I make them with leftover mashed potatoes and fry them up in butter and they are great--because what's  not to like about a potato and butter?

Mostly we eat them for breakfast with leftover potatoes, but when I need a fix, I'll do the raw potato version.
Rye toast with butter is the best kind of toast to dip into a runny/drippy egg.
Don't argue with me all you 'yolk' haters---I don't want to hear it. 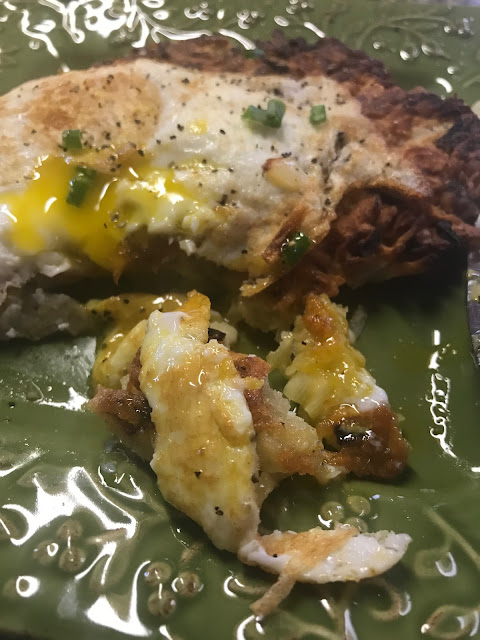 A few recipes ago... I was talking about cowboys.... and how I see them every single day of my life.  And yet, none of my every day friends are cowboys/cowgirls...we just live in the midst of them.

Here is part of my cowboy life... or rather my life, which includes seeing cowboys or cattlemen every day.
All these photos are from about 3 years ago--but I always help with the Livestock auction, so it could have been just last year?

And to keep it all in the theme---cowboys would never call it a Latke, BUT I am sure---100% positive that nary a cowboy would ever turn their noses up at anything made with potatoes.

Every summer towards the end of July the Convention Center hosts a video cattle auction, where cattlemen, ranchers and cowboys come from all over the country... my friend  Shelly said it is like QVC for cattle.   And she works there at the convention center, so she knows.  It's EXACTLY like that.

I was a bit disappointed because they were not having a raffle for  "sperm" this year.  Or if they did, I missed it.   It's high quality sperm.
I don't mean the cowboys....I mean the  bulls.   (I'm feeling like a rebel--a bit naughty talking about  sperm. It's not your everyday blog conversation, is it?)

You didn't think they let these cattle do 'it' naturally, did you?  Pfffttt!!!   No such thing.  (well, I guess if there is a will there is a way, but...)  if you want really high quality stock, artificial insemination is the way you go.

But enough of that  (I had really wanted to take a picture of the sperm raffle tho, since I didn't get it last year)  this weekend, we are trending out of cattle auctions into   Fifties Fever!  A car show and fun filled 50's style weekend around town.

WAIT!
I found this semen directory---not as good as a sign saying 'semen raffle' tho.
Just order what you need from this catalog! 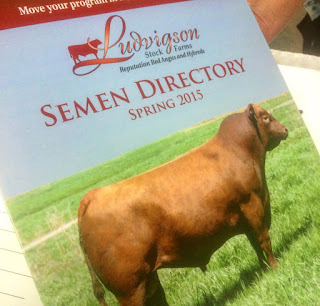 For now tho... a few pics of  hats.   I don't know if this happens anywhere else, but  cowboys here wear different hats and I want to know why.  I should have just asked someone last night....but the mystery and intrigue is more fun than knowing I guess.

(I'm just kidding about mystery and intrigue---maybe it's just a style thing)
I found this in  cowboy hat etiquette:
"Do not interfere with anyone else's cowboy hat. A hat is a prized, personal possession, and should be treated with respect."

I don't know if you can see this very well, but it's a regular style of cowboy hat. He was showing the kids how to use a lasso. 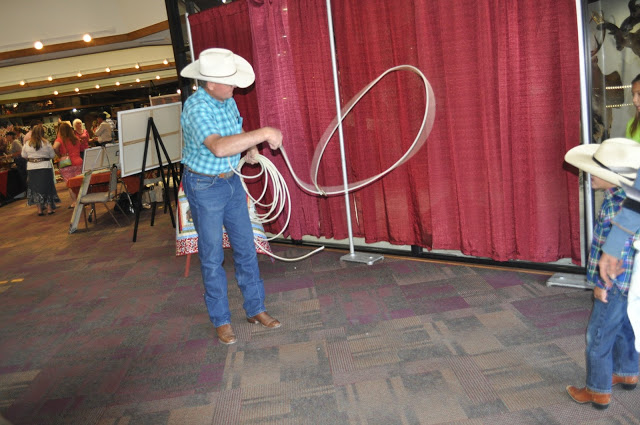 Let me see if I took a better picture of a regular cowboy hat.... a bunch of them!
Starting to wait in line for supper. 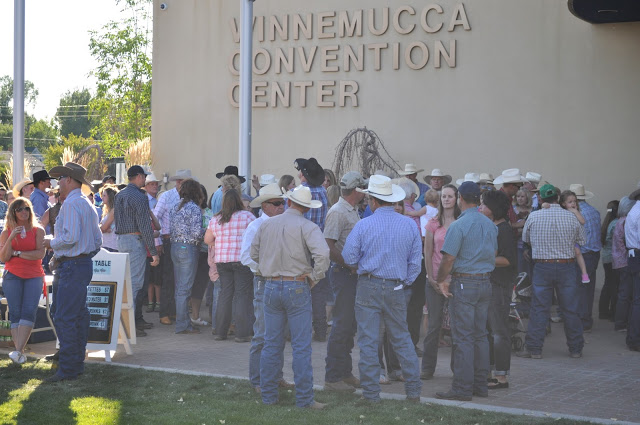 And then you see the 'flat top'  kind of cowboy hats.  I've heard this described as a "buckaroo" hat.  They use that word, Buckaroo, a lot around here.  In fact, the Buckaroo Hall of  Fame is in the building my office is.
I don't really understand the difference between a buckaroo and a cowboy, but THEY DO, and that's the important thing.  I guess.
I think this might have been the first cowboy hat, and the creases in cowboy hats came later.

Pay no attention to our friend Nate in the fuzzy visor hat in the background.  That's not his real hair--he doesn't have much. 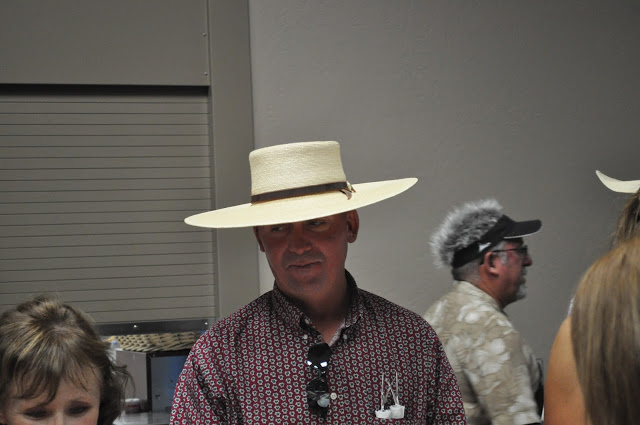 Then, once in a while, you'll see a cowboy in a tall hat like this one.  I guess that's a  Ten Gallon Hat.  It's still interesting to me to see who wears what. 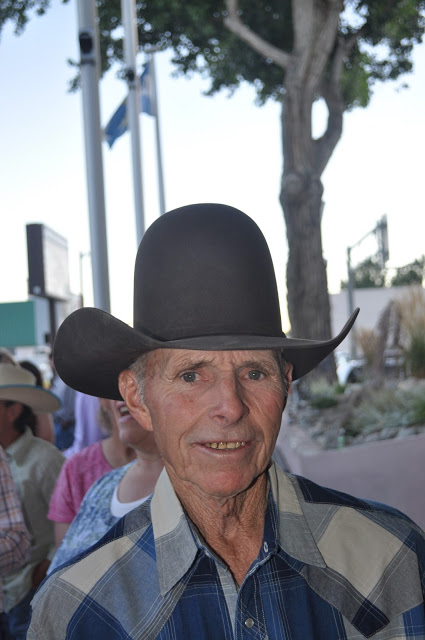 How to make a cowboy hat!
I took this picture from another rodeo event, but it seemed to fit in good here!
I did ask this guy about the different hats and he said it really doesn't mean anything....like different cowboy gangs etc. (I've seen the show Yellowstone with Kevin Costner--cowboy gangs are a thang! LOL )
It's just a preference thing. 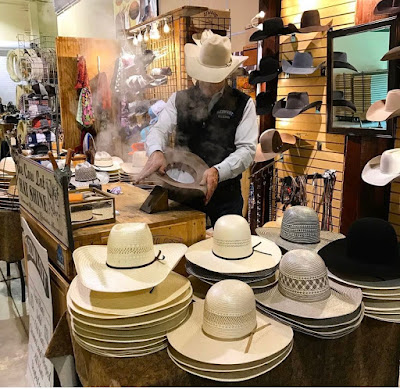 They grilled 1200 steaks in the alley. 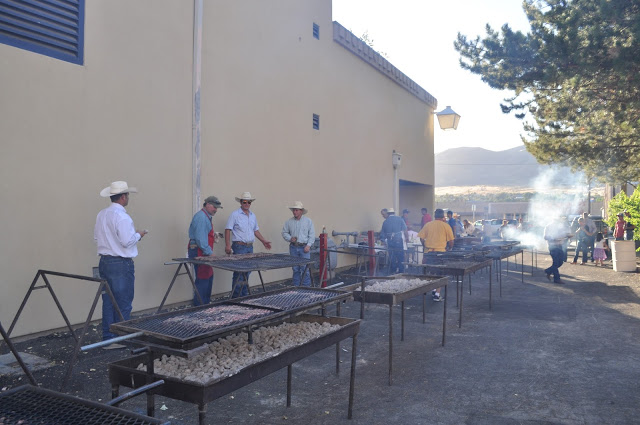 And made lots and lots of salads, beans, bars. 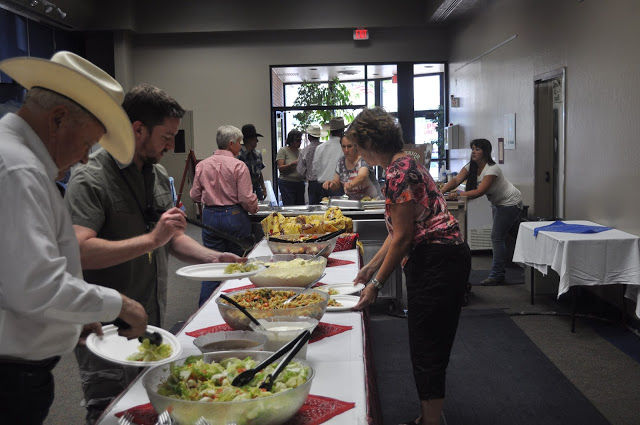 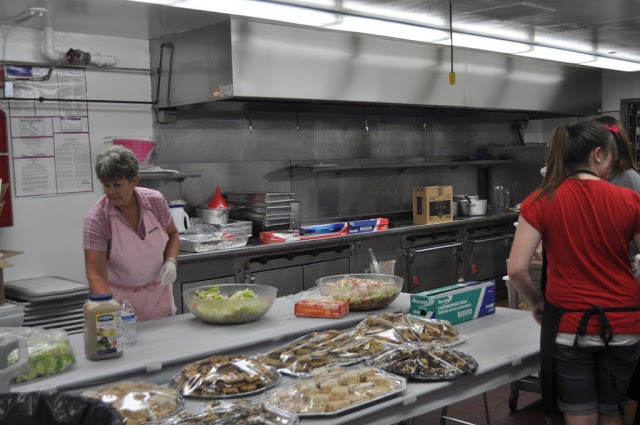 It was our job to let the crowd in. All 1200 of them,
according to when and how many steaks were coming off the grill.
The cooks told us to let 20 people in every 5 minutes.
We synchronized out watches.
(Okay, I took pictures, but I made sure all the door keepers, the Handyman included, synchronized their watches) 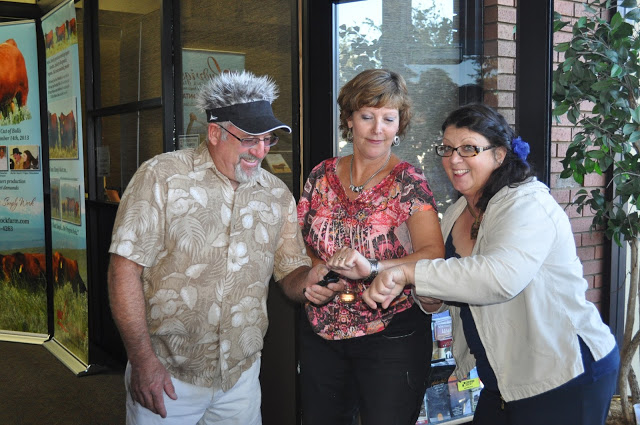 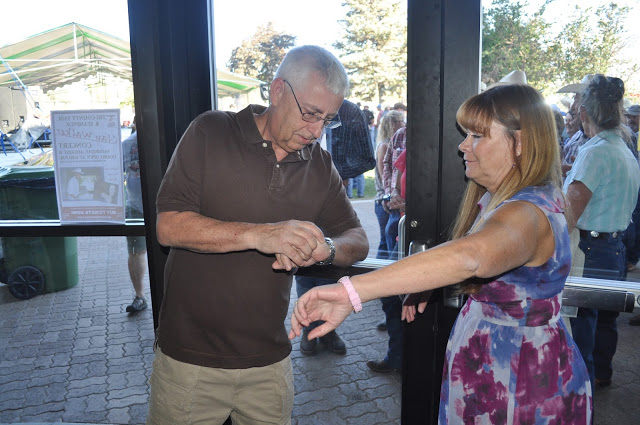 And then, we just had fun. 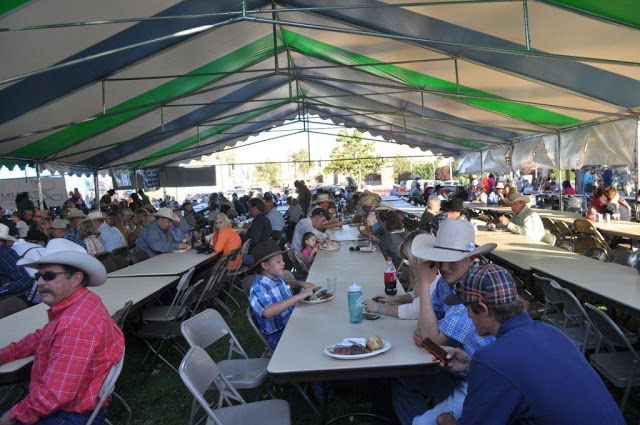 This band was from Louisiana--Waylon Thibodeaux
Fun Cajun Music! 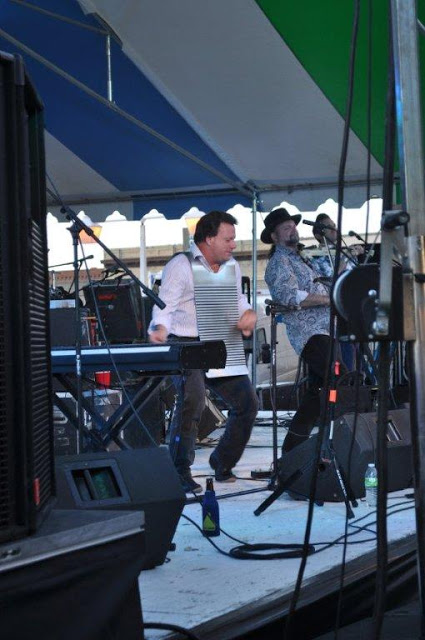 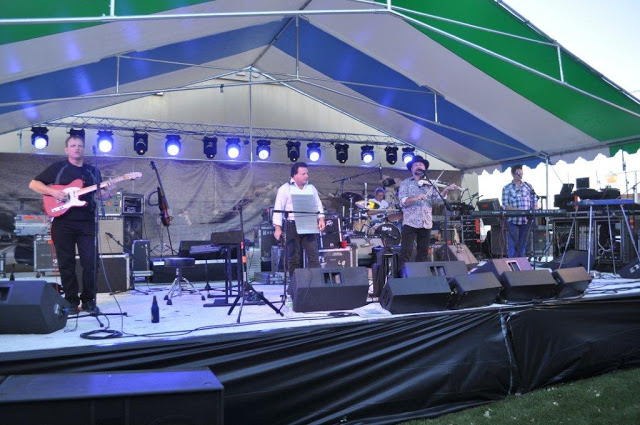 Shelly got locked outside with all the cowboys! 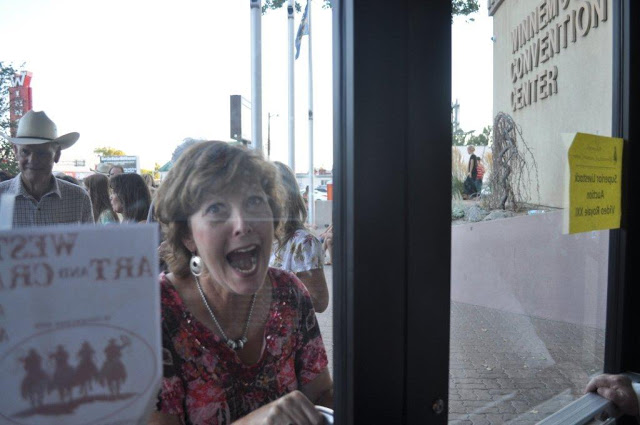 Jolina had to fight her way in! 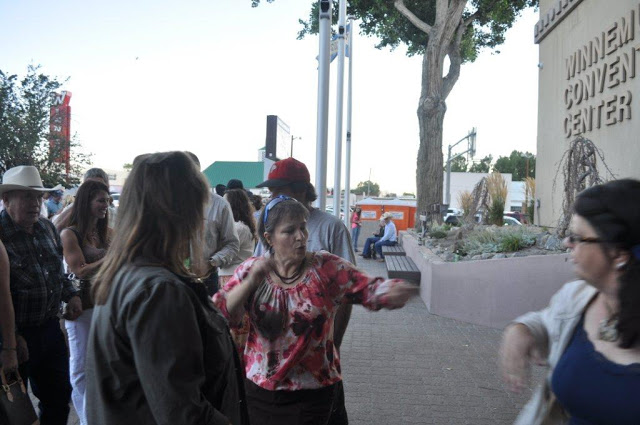 It was very fun.
At the end of the evening...
we were very tired.

(notice men with cowboy hats on the stage?  Next time I'll talk about cowboys and tight fittin' jeans 😃!!) 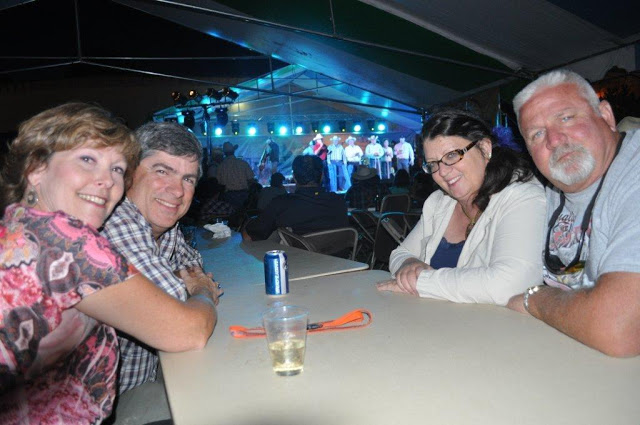