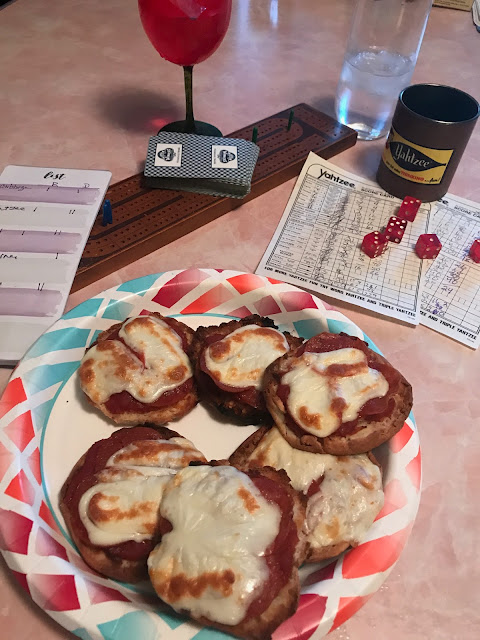 What is the Friday Friend cookbook? I had about 50 of my closest friends and family on an e-mail forum which I called the Friday Friends (from all over the county). At first, most of them didn't know each other, (they knew me) but over the past 18 years, we've answered and shared silly--and serious---questions, exchanged Secret Santa Christmas gifts, had a dieting contest in which we paid a $1 a week and that money went to a scholarship fund for a Friday Friends son's memorial scholarship, and we went on a great vacation for my 52 birthday. (plus so much more....)

Which brings me to this... recipe #207
Cindy's Mini Pizzas 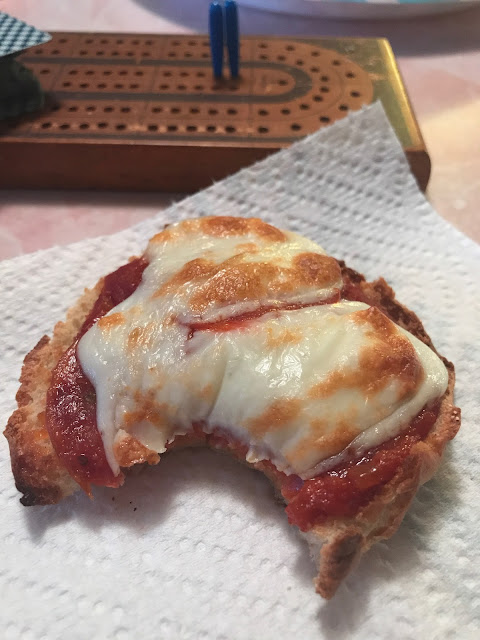 Let me just apologize for the quality of the photos before you think 'ewwww', because as you know, it's the friendship and the story/memory that matters, not the photos. They look a little 'over done', but they really weren't.  Having said that---everyone loves these anyway! They are the perfect camping food, cooking with kids food, work night because you need something fast and comforting food. 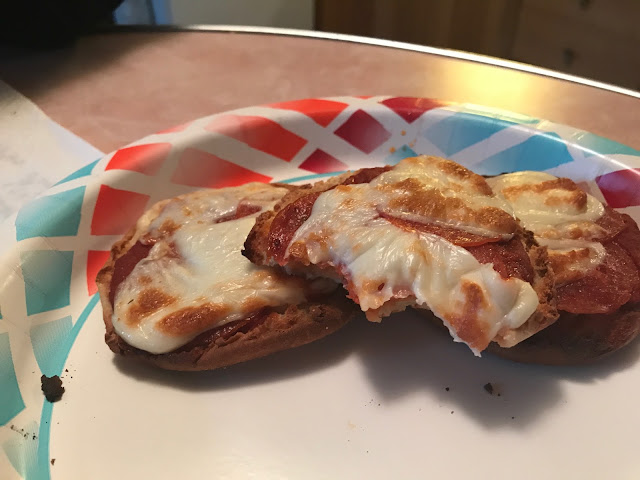 I made these last fall when we were spending time at our cabin. We were having a serious game playing week-- we had to keep track of who won what, to be sure no mistakes were made on whose name went on the cabin trophy.
Gin and tonics, wine, Yahtzee, cribbage, Nertz (or Bolshevik, depending on who you are) Speed, Rummy--- and Mini Pizzas!  I was not taking time out to cook a complicated meal.
This was perfect! 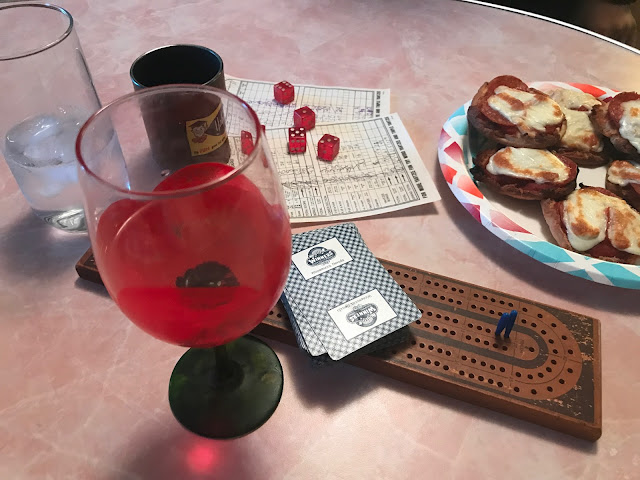 Let me introduce you to Cindy B!   Yes, we are 207 recipes into the countdown and yes, this is her first appearance.
Cindy, or CJ, is in the middle in the photo below---flanked by me on the left and Debbie E (my 6am Tuesday coffee friend) on the right.
This photo is also about 20 years old.
I think we look exactly the same.
Cindy moved from Winnemucca about 22 years ago--back to Wyoming, her home-state.
The thing I hate about people who move away (besides missing them) is that we didn't have cell phones back in the day and coming up with photos is hard for me. Cindy is  not much of a social media user, so stealing photos of her is also difficult.
So,  here you have it---20 years ago! 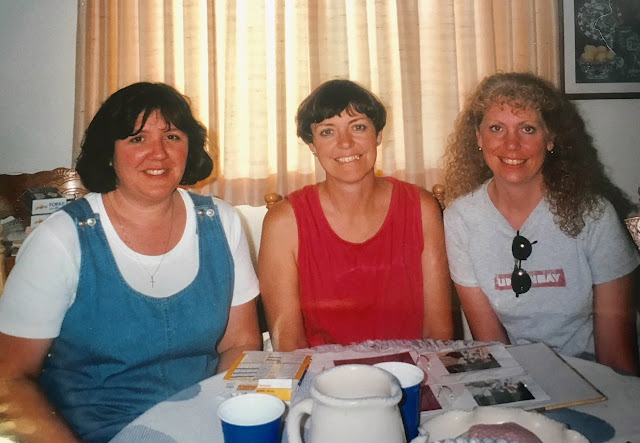 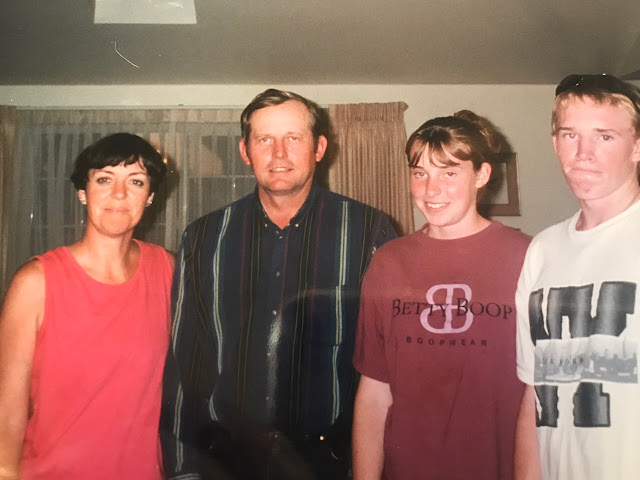 My favorite Cindy story---is one that has to do with food.
Early in our friendship, Cindy had invited us to dinner at 5.
Now, when I have people over for dinner, I invite them for, let's say 5, but we don't actually eat until 6 or 6:30. We have appetizers and cocktails or whatever.
Cindy, on the other hand meant that dinner was at 5 and they do more of their socializing afterwards with dessert and coffee or drinks.  Anyway, we were still at our house at 5:05 trying to get all our kids in the car when the phone rang and she was asking where we were--dinner was ready!
I felt HORRIBLE as it was early in our friendship and I had made a terrible misstep!   A social faux-pax!!
We laugh about it now--but it was probably not so funny to her when we weren't on time for her lovely dinner.  We arrived at 5:10, slid into our seats at the table where her family was patiently waiting to eat, and after a bit of awkwardness on our part, for being the bumbling dinner guests, had a very nice and fun evening.

We quickly fell into each other's grooves tho-- she began to invite us to dinner earlier, before the time she actually wanted to eat, so we could be fashionably late without worry of ruining a dinner.  And she also started to give her family an energy snack before coming to my house for dinner, as they would have to wait an hour with grumbling tummies if they didn't have something in them.

Since Cindy was not a prolific recipe contributor for the Friday Friend Cookbooks, (I think she might only have one more to go) I am going to share a couple photos of what she is up to now--20 years after those photos were taking above.

She owns her own Yoga Studio  in Gillette, Wyoming, called Wyoga Studios. She is a grandma, a traveler and to be perfectly honest---not a great letter writer!
She doesn't always write letters, but when she does, they are worth putting aside until my chores and errands are done, indulging myself with coffee or tea or wine, then sitting back to read all about her adventures. 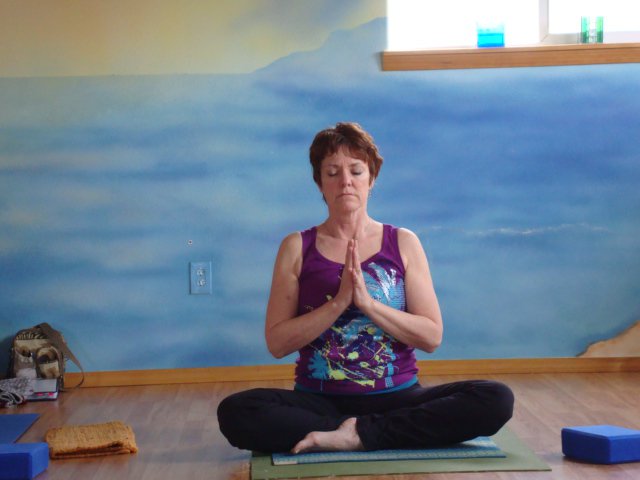 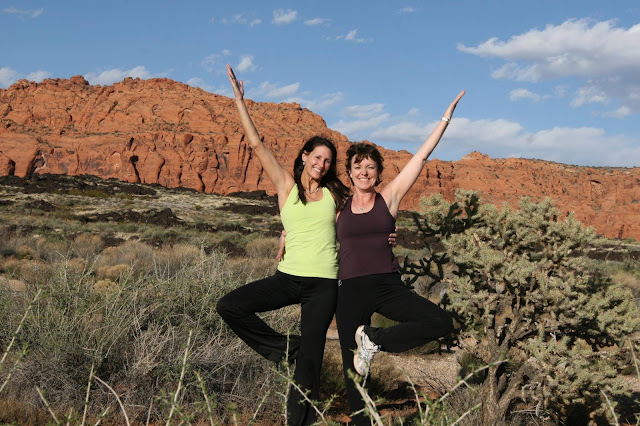 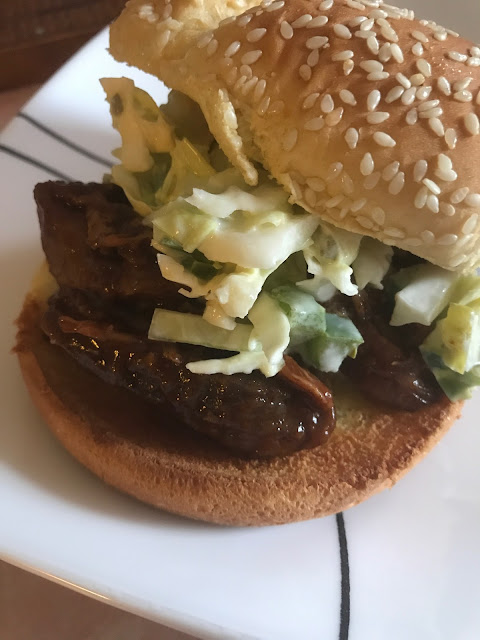 Come with me as I continue to countdown my Friday Friend Cookbook!
What is it, you may ask?
In a nutshell...
About 19 years ago, 50 of my closest friends and family, who had been on an e-mail forum with me, sent in recipes in different categories and we compiled a cookbook.
I decided to count those down!
Why?
Because  one night I was looking thru the cookbook and I said, "I should make every recipe in here for my blog"
The Handyman--who thinks he knows me better than I know myself, said,  "you'll never EVER do that."
Well,  maybe I will!  Maybe I'll show him!
Which brings me to recipe #206 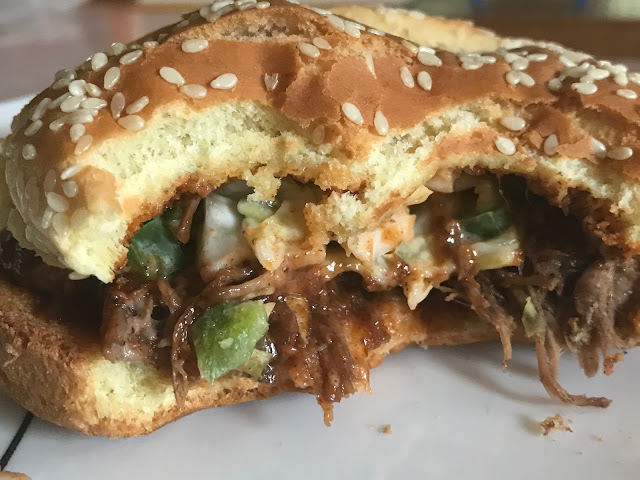 I know that this can make a great freezer or make-ahead meal too.  Easy to make and easy to take---so pot luck also!
I made this last fall--that's LAST fall, as in a year ago, and the photos have been sitting in my drafts waiting for me to blog about it.  Maybe if I wasn't such a procrastinator I would be done with this cookbook challenge!
When we were at our cabin LAST fall, I was reading a book called "The Comfort Food Diaries" and I came across a bbq sauce I wanted to try, so while this recipe for 'easy Shmeesy BBQ Beef' says to use a bottle of premade bbq sauce--which is super easy and good--this time I chose to make a homemade sauce. You can do it however you want. 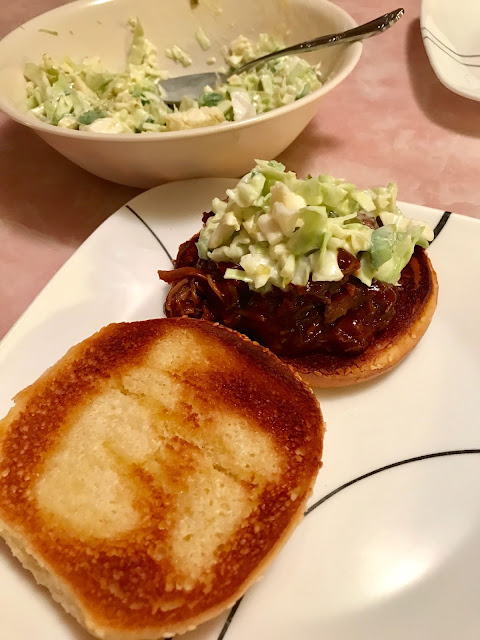 The Comfort Food Diaries is a memoir on the author's quest to find the perfect dish to mend a broken heart.
After a bad break-up (and a drunk, embarrassing Facebook rant) the author finds a way forward and travels the country, cooking and staying with family and friends while searching for the perfect comfort food...she finds that food is a source of connection (just look at me here connecting with all of my friends!) and identity.

Fast forward to a chapter called 'Finding the comfort in comfort food." in which she makes her brothers  favorite bbq beef recipe. It uses ketchup.  I wanted to give it a try---because I was comforted and nostalgic myself about comfort foods while reading this book. It make me yearn for my mother's odd little side-dishes: a can of green beans with chopped onion and mayonnaise.   Eaten cold of course.  Or sliced oranges with coconut sprinkled on top.  Or a canned pear half with a dollop of mayo and grated cheddar cheese on top.  Things I haven't made in a million years, nor would I really want to, but they bring back so  many memories.

Anyway... here is the sauce I made;
(but I used a crock pot and let it cook all day while we hiked)

2. Add the shredded meat.  Cook down very slowly to desired thickness.  Must serve on large buns, that have been toasted, with slaw.

Of course you can do whatever or however you want with Easy "Schmeesy" BBQ Beef, but the original is here: 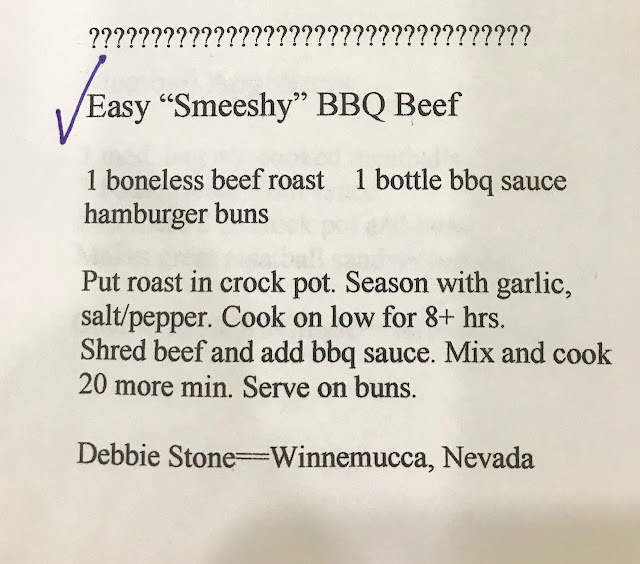 I made FRIED APPLES  for a side dish---another little oddity food item my mom make when we were growing up.  She would just fry up some apple slices with butter and brown sugar and a bit of cinnamon.  Don't knock it till you try it!
Texas Road House used to serve Fried Apples too. 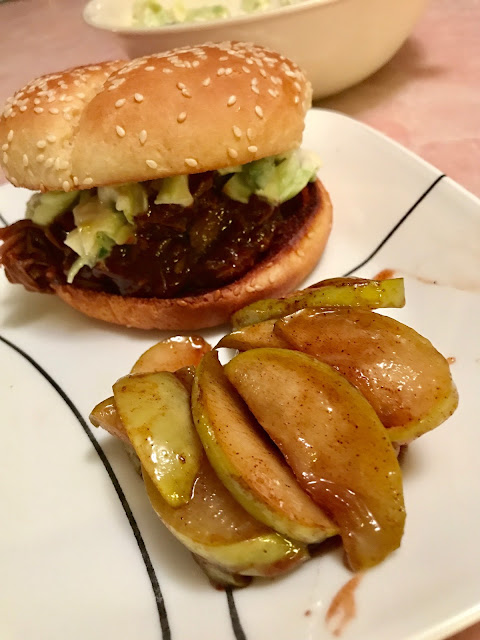 And now I'm supposed to do photos of me and a story of me. I thought that I would put up some photos of the Handyman and myself up at our cabin.  Hiking photos or something, but just last weekend we attended the mayors ball.  I don't do sparkly very well--- I do hiking in the mountains better--but I found the perfect dress and  I think I pulled this off!
Give me jeans and a walking stick any old time. Or jeans and a book by a fire and a glass of wine--the best!

We had a fun time at the Mayor's Ball tho. 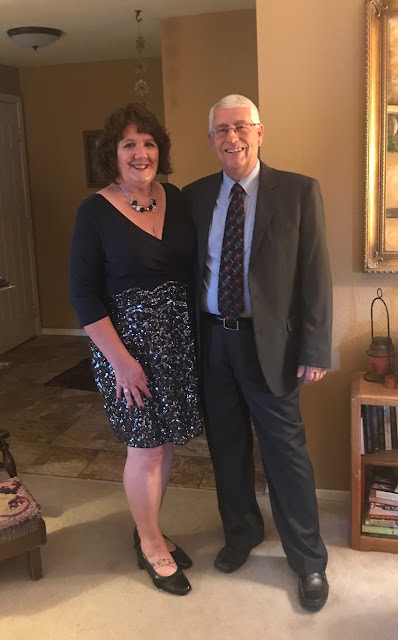 We went with our friends The Engstroms. 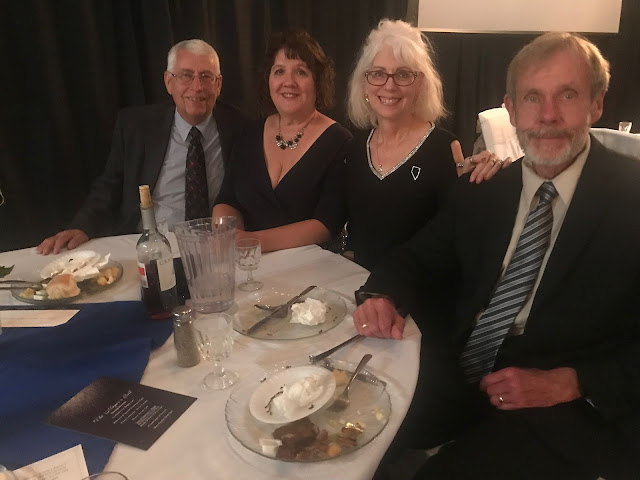 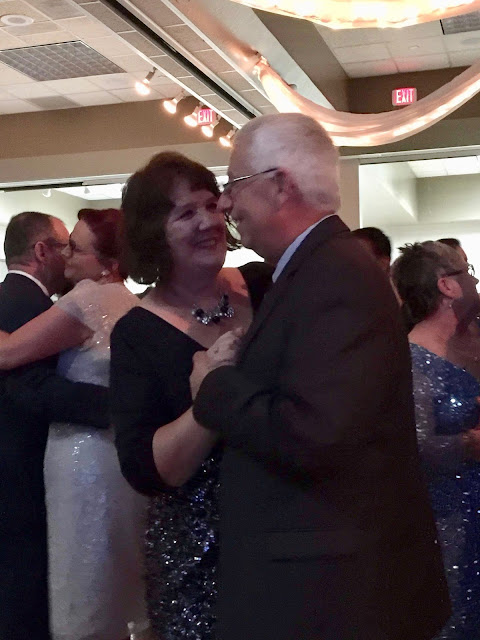 The Handyman looks like he's grabbing on to me for dear life!
Which is weird, as it didn't seem that way at the time.
OH-- I know, he grabbed my wrist to turn me around to get our picture taken.  😍 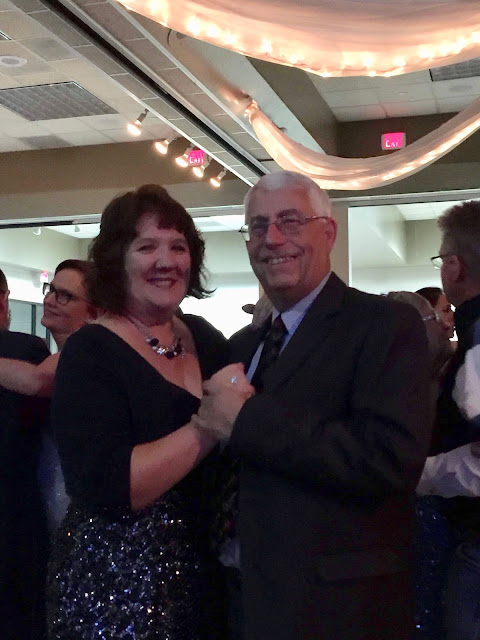 We saw other good friends. 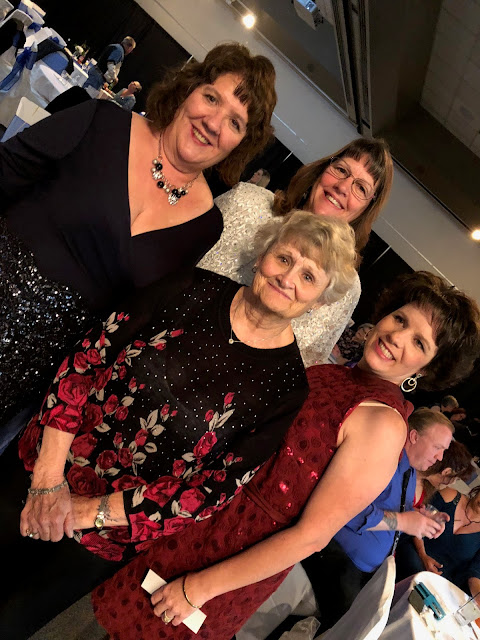 All in all  a very nice evening.