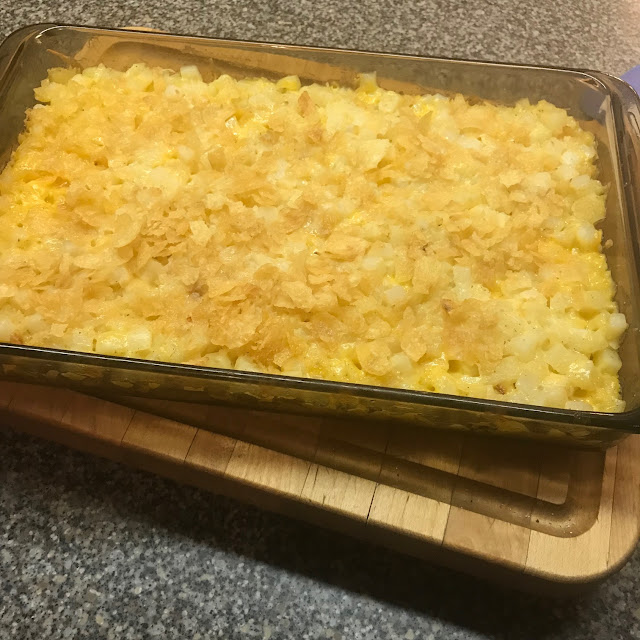 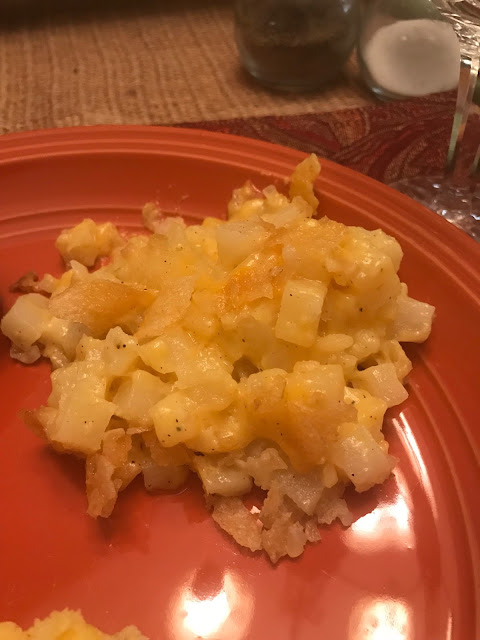 I wouldn't call this scalloped potatoes but my mom turned it in like this.   This is NOT the scalloped potatoes she made every Easter of my life--but this is a good 'potato casserole'.
I tend to make dishes like this more for a breakfast or brunch than I do a dinner--either way, it's still good. 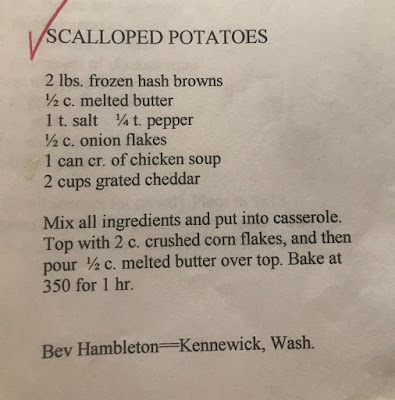 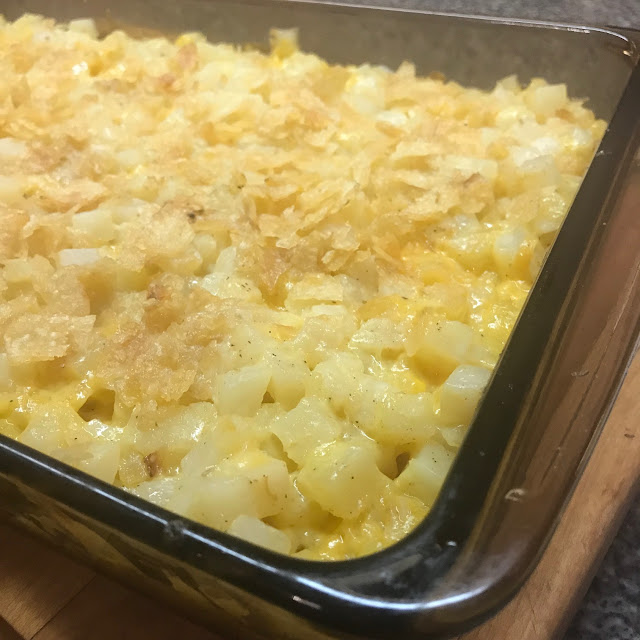 This is my mom's 40th recipe turned in to the Friday Friend Cookbook, so I think I'll show a photo of my dad and me. 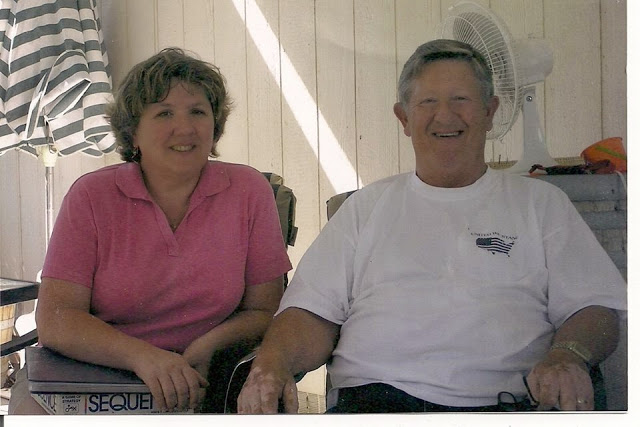 My  parents have both passed away and we, of course,  had to sell their house---and I remember the day we accepted an offer on it, I wrote this entry in my blog -- back when I had a blog ( this is technically a blog, but now it's only being used to showcase my recipes for the Friday Friend Cookbook Countdown) 5 years ago... We were feeling very melancholy about selling the house.

This post is about--THE HOUSE.
The house I grew up in!!
We sold it today.
My parents bought that house when I was 7 years old...they lived in it for just about 48 years.
It's just a little 1959 built,  box of a house.
But it was our home.
All of my childhood memories take place there -- it's the only home my brother remembers.
We played OUTSIDE with the neighbor kids in the days you could play outside until dark.
Kick the Can
Ollie Ollie (what every you call it)
Red Rover
Mother May I?
And a made up game we called Black Cats and Cool Cats.

All those kids are gone now, as are their families.
My parents and one other family were the old holdouts.
It dawned on my last month when we were up (in Washington) for my mother's memorial (she passed away in December) that I'll probably never see the old neighbors Joyce and Jack again!

The neighbor boy, Gene McLaughlin, will never know where to find me!!!
(he grew up 3 doors down and I used to dance to my parents Nancy Sinatra album These Boots are Made for Walking, on the fireplace hearth, hoping he'd come by and see me and fall madly in love with me!)
(well okay, he's dating an old high school friend of mine, I can find him if I want--but that's not the point.  He used to stop by and visit my parents once in a while--- he has no neighborhood people to visit anymore!!!)

We spent Christmases in that house---many of them!
And lazy summer afternoons.

And football!!
The sound of football games on the TV coming from the living room-- that was my dad!

My parents used to have dance parties in the 60's and 70's, in the basement!!
Cat eye glasses and clinking cocktail glasses!  My brother and I used to sit on the steps to the basement and listen to them-- we were supposed to be in bed.
Later, BBQ's, babysitting and church swim parties!!
All of my high school dance pictures were taken in front of THAT fireplace!
Then later there were grandchildren, now in their 30's and 20's who only knew that house for their Christmas dinners, Easter dinners, Sunday dinners. OR just hanging out there.
Grandkids loved to do that--hang out-- as their was a pool table in the basement and a swimming pool and a hot tub. (the swimming pool and hot tub came after I left home--for the grandkids)
It was a cool place to be!
I could go on and on.
I am being over-sentimental.
I know it.
My sister-in-law Sylvia said last night
I didn't grow up there, but the 25+ years I have spent there makes it home.

I am hoping that the new young couple are very excited about their first home together.. and I hope they can make as many great memories there as we have had!
Also---if they tear up the cool 1970's patchwork, piecemeal carpeting in the deep dark basement, I'll be mad!!
(I'm joking!!  I so wanted to redo my parents basement!  Wasn't there a show on HGTV called something like "my parents are stuck in the 70's?"   I always wanted to turn my parents in for that!) 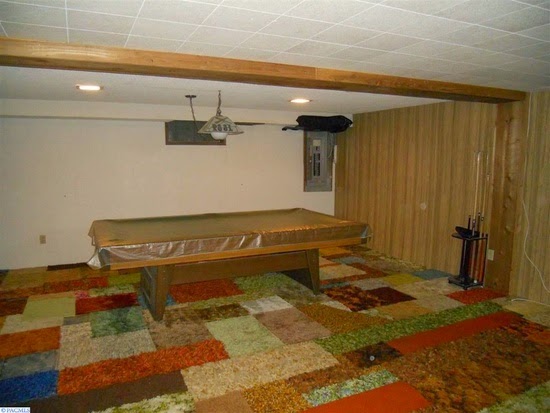 I will miss this place.
I have tons of other pictures but just took these off of the realtors website.
Usually there would be flowers and 'stuff' around the pool, but it was early spring and we had moved all the junk/stuff away.
This is the little box house I grew up in, where my mother cooked many many meals which featured potatoes of many kinds. 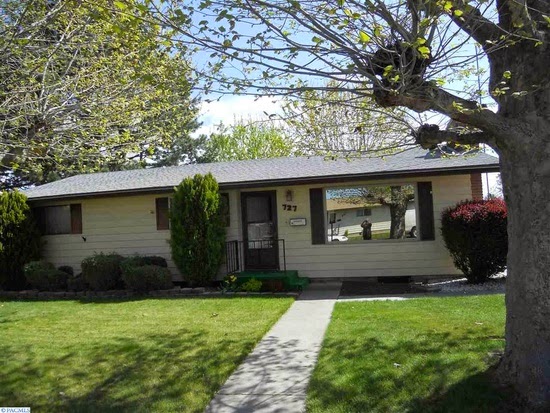 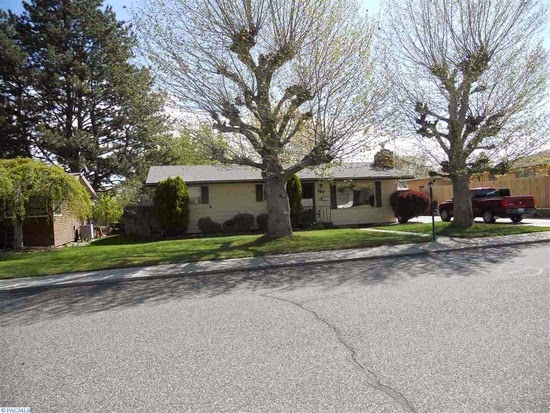 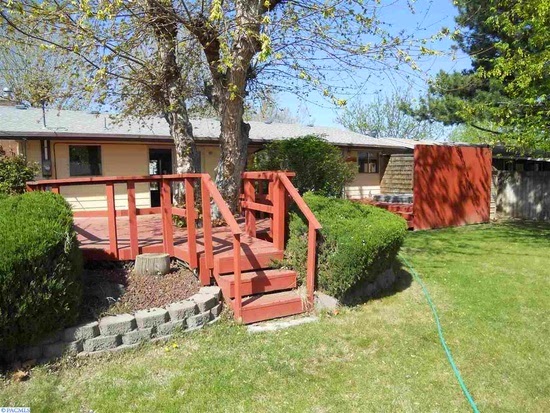 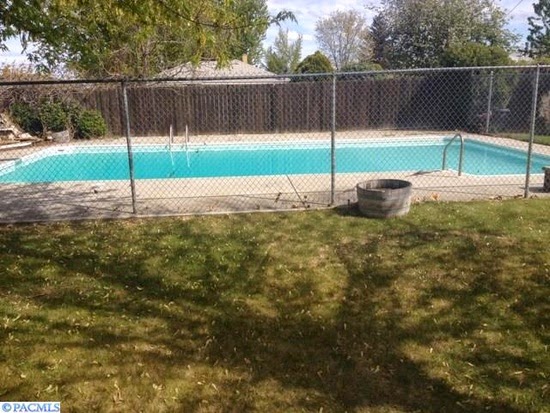 my friend Karen sent me this poem the day after we sold the house.  It was fitting.

My Childhood Home I See Again
by Abraham Lincoln
My childhood home I see again,
And sadden with the view;
And still, as memory crowds my brain,
There’s pleasure in it too.
O Memory! thou midway world
‘Twixt earth and paradise,
Where things decayed and loved ones lost
In dreamy shadows rise,
And, freed from all that’s earthly vile,
Seem hallowed, pure, and bright,
Like scenes in some enchanted isle
All bathed in liquid light.
As dusky mountains please the eye
When twilight chases day;
As bugle-notes that, passing by,
In distance die away;
As leaving some grand waterfall,
We, lingering, list its roar—
So memory will hallow all
We’ve known, but know no more.
Near twenty years have passed away
Since here I bid farewell
To woods and fields, and scenes of play,
And playmates loved so well.
Where many were, but few remain
Of old familiar things;
But seeing them, to mind again
The lost and absent brings.
The friends I left that parting day,
How changed, as time has sped!
Young childhood grown, strong manhood gray,
And half of all are dead.
I hear the loved survivors tell
How nought from death could save,
Till every sound appears a knell,
And every spot a grave.
I range the fields with pensive tread,
And pace the hollow rooms,
And feel (companion of the dead)
I’m living in the tombs.