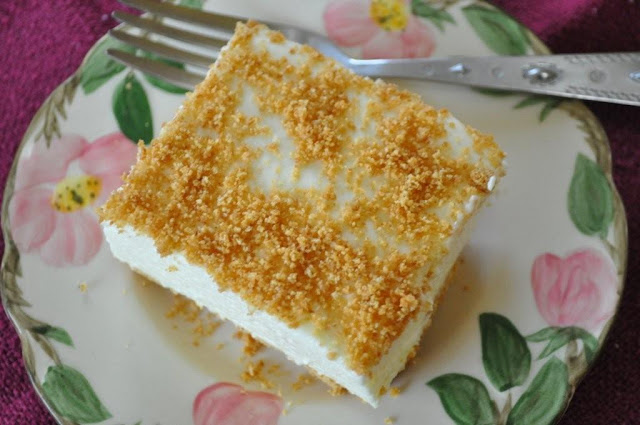 Grab your coffee cup, or  your coke or whatever your poison is, and settle down for a long read.  I should probably post about the cheesecake first, but...all of my recipes have a story.  Granted,  these stories might not be all that interesting to you, but they are interesting to me.  And this is my blog.  WHICH by the way brings me to state, that I'm not changing my blog. ( in my last post I was thinking about having a defined theme to my blog)  It's a book and cooking blog.  I'm over my identity crisis.  Eating and Reading--this is the blog for it!  My apologies to all you purists out there reading this right now  (hahaha...if you are a purist, you certainly aren't reading this blog), but....

OKAY....I'll quit rambling and post the cheesecake recipe.
I was looking thru  some Kopycat recipes the other day and I came across this recipe for Woolworth Cheesecake.  I don't know if anyone remembers the old Woolworth  5 and dimes, but I do....and I tasted my very first piece of cheesecake at their luncheonette. 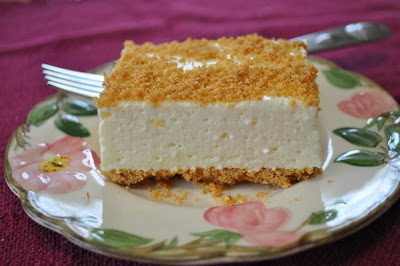 Dissolve Jell-O in boiling water.   Cool until slightly thickened.
Beat cream cheese, sugar and lemon juice with mixer until smooth. Add thickened Jell-O and beat well.
In a separate bowl, beat the Carnation milk until fluffy.  Add cream cheese/Jell-O mixture and beat well with mixer.
Line the bottom of a  9x13 pan with crushed graham crackers, reserving some for the topping.  Spread filling over the top and sprinkle crushed graham crackers on top.
Chill. 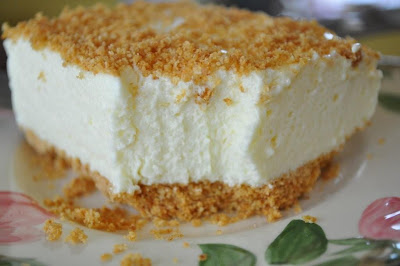 My thoughts:  This was a really good dessert.  I would make it for company, we liked it very well.  Tasted very lemony.   BUT--it didn't really taste anything like cheesecake.  Even the very first Cheesecake I had at the Woolworth's Luncheonette.
I would rename it  "Lemon Fluff"  or something.  And for lemon lovers who are looking for  light (not in calories, but in filling) dessert for a spring get-together, this is it!
It looks like what I had at Woolworth's Luncheonette all those years ago. They were square and sprinkled with graham cracker crumbs on top too.  I might make it again and add some more cream cheese, and less evaporated milk and see what happens.
I also added a little  melted butter to the crushed graham crackers to help them bind together and I stuck the crust in the freezer while I made the filling. 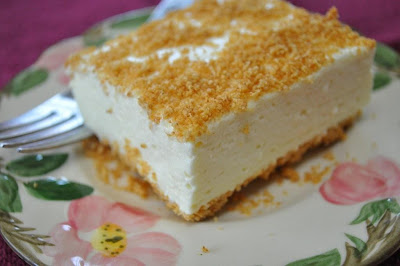 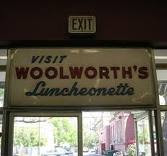 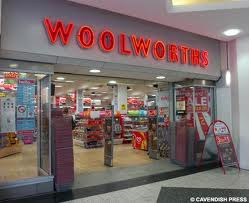 The Woolworth's luncheonette!!  What do you remember about them?  I loved them.  I think the reason I am overweight today is because lunch has changed so much--SO MUCH over the years.   We used to be happy having an egg salad sandwich and a cup of tea...then hamburgers came about. With fries and then shakes and then they started to SUPERSIZE everything.
We don't need that much for lunch.    People make fun of the 50's and 60's health/diet wise, but seriously?  One tuna sandwich a pickle and a glass of milk  vs a Big mac and fries and a coke?   Which is better for us?

I don't actually see  cheesecake on this menu--but I swear I remember this menu!!   But I also remember hamburgers, cheeseburgers, and BBQ beef that simmered all day in  a warming drawer and by the end of the day looked pretty bad. 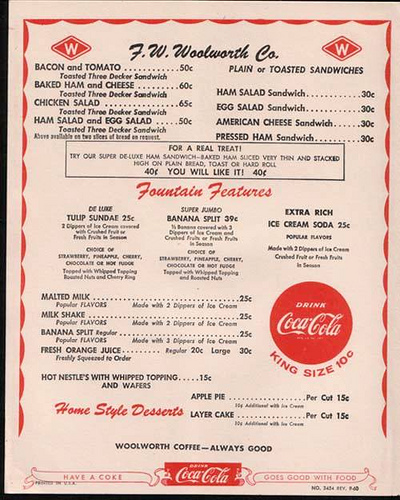 The memory that should stand out in all our minds about the  Woolworth's Lunch counter is the "sit in".
On February 1, 1960, four black students sat down at a segregated lunch counter in a Greensboro, North Carolina, Woolworth's store. They were refused service, touching off six months of sit-ins and economic boycotts that became a landmark event in the U.S. civil-rights movement. In 1993, an eight-foot section of the lunch counter was moved to the Smithsonian Institution and the store site now contains a civil rights museum, which had its grand opening on Monday, February 1, 2010, the 50th anniversary of the beginning of the sit-ins.
I grew up in the northwest,  so segregation is foreign to me  (NOT to say we didn't have our race issues, or prejudices, but not segregation).  I didn't  understand how you could "not serve" someone who wanted to eat. 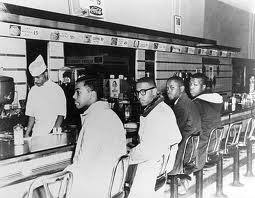 The Handyman and I are listening to the 60's on Sirius/XM radio and they are playing a lot of Monkee's songs.  On account of the Monkees having their 45th reunion tour this summer.
45 years ago!!  Wow.   Time flies.
Then a song came on called "Where the Action is" and the Handyman remembered a  TVshow called  "Where the Action is."   I didn't.  Of course he is much much older than I am.....HEY, I'm surprised he remembers that far back.
(okay...I've picked myself up off the floor, from laughing so hard)  He's not much, much older than I....only one much.
I on the other hand remember,  "Happenin'  '68" with Paul Revere and the Raiders (who also hosted  Where the Action is for a couple of years).    They were all Dick Clark productions.

I am meandering, but does anybody remember  "Where the Action Is?"

Talk about meandering...you should check out my blog from a year ago!  I made some great Iced Tea!   And, I reminisced about some great children's books.
at March 13, 2011

I don't remember the cheesecake at Woolworth's, but I just loved that store. There was one in El Centro with the lunch counter. I don't remember when they closed it up, but when Cameo was a baby, my sister (and her baby, 8 mos younger than Cameo) would put the girls in a stroller and walk to Woolworth's and have lunch. We always sat in the same booth. So much fun!

What a fun post! I was born in the 70's so I don't remember the cheesecake at Woolworth's or Where the Action Is. :-)

The cheesecake sounds delightful! Now if I could only find a pkg of lemon jello in Germany. Then I would try this recipe. The photos look yummy!

Hi Debbie!!!
I remember Woolworths. Not the first place I ever had cheesecake, that would be Juniors in Brooklyn!!! However, I certainly remember that counter and how I felt like a "grownup" eating up there:)

I also remember Where the Action Is! I think my sister and I were "allowed" to watch it after school but before my father got home from work. If I remember correctly, it was something like American Bandstand. The words are rumbling through my brain right now!!!

I'm so glad you have "found yourself." You have a GREAT blog!!!

Thank you so much for sharing. The cheesecake looks dreamy:)

This is like a blast from the past.......I remember The Woolworth's Stores. I'm from Canada and we had them all around the city in Toronto. My fave use to be the American Cheeses Sandwich. Then I lived in Irvington, NJ and remember the one they had there also. Thanks for the memories. :-) and the recipe.

I thought maybe I was going crazy I too found this recipe followed it to the letter and yep lemony.. I even skipped the lemon juice because I was paranoid about all the lemon to begin with. I see other people raving about it on forums but to me I might try it again and use plain gelatin.. I remmeber the Woolworth Cheesecake. It was this icebox style tall square pieces.

Was just talking to my sister who worked at Woolworth and ask her about the lemon fluff they used to made. She said it was cheesecake..lol Search online and low and behold your site and recipe with pictures came up... Thank you sooooooooo much! I loved this cake sooooooo much as a little girl. Brings back wonderful memories... Corinne in BC Canada

My grandmother made this every day at Woolworth. She has the original recipe, and it does not call for lemon juice. I have made it several times using her recipe and it taste exactly like the Woolworth cheesecake. I have used different flovors of jello and using strawberry jello was a big hit.
I actually think it is better without the lemon juice. The original recipe also has 1 teaspoon of vanilla. Other then the adding the vanilla and omitting the lemon juice, you follow the same recipe.

The original recipe didn't call for lemon juice. They used vanilla extract. My sister worked in the kitchen and she has the original recipe. She makes it for holidays and unfortunately, no matter how much she makes, it's gone almost as soon as she sets it out!

Rosabela, you can replace the boxed lemon jello with a lemon jello recipe from scratch. For four persons.

Or use dr. Oetker Götterspeise (Wackelpudding Zitrone) :-) "jell-o" is basically just a label for flavored gelatin puddings, jellies, gelées or, well, jello, as it is now-a-days.
3 oz. package makes four portions, and if I understand correctly, there is two bags of jellypowder in Götterspeise package, each for 4 people, so use one of the packages.

It really is worse for me, because here in Sweden people are not that into jello. I haven't seen any boxed jello anywhere.
But - I know how to make my own, so... it won't taste like "Woolworth's" though.

My friends father was a store manager in Colorado Springs in the 80's. We would go and visit him then stop and enjoy a piece of this dessert! Great memories!

I remember Woolworths cheesecake. We had one in Bloomington Illinois Eastland mall when I was a kid. I don't like cheese cake very much but woolworths was amazing. I can't wait to make this.

It gave me great quinces, and the recipe that I am not happy, I am very grabs! thank you in advance
I board a good recipe already dealt a site like this
recette couscous

Pizza!  Pizza Pie! Welcome to my Cooking  Club Post! It happened to be Pizza night ( 3 years ago--oh my!)  because Paul got a brand new ... 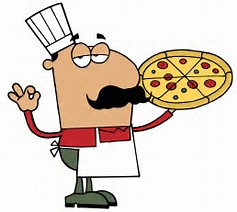