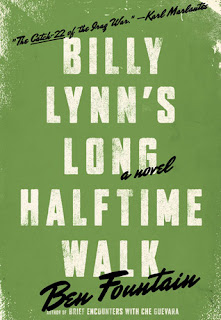 From Goodreads:
A razor-sharp satire set in Texas during America's war in Iraq, it explores the gaping national disconnect between the war at home and the war abroad.

Ben Fountain’s remarkable debut novel follows the surviving members of the heroic Bravo Squad through one exhausting stop in their media-intensive "Victory Tour" at Texas Stadium, football mecca of the Dallas Cowboys, their fans, promoters, and cheerleaders

From Me:
Quote from the book: It's sorta weird being honored for the worst day of your life.

I think this about sums it up---the American public have no idea what our soldiers go thru in war.
This book is satire, but you get to go inside Billy Lynn's mind for one day and see what he (or any soldier returning from Iraq or Afghanistan) might be feeling and thinking. Especially when being honored during halftime at an NFL football game. That in itself is just crazy showmanship---and perhaps not honoring at all--just displaying (for some crazy reason that most people think of as patriotic---don't get me wrong, I love NFL football and I love the production of a halftime show, but is that what returning 'war heroes' need?  Or want?  It's debatable.  And discussable.)
Billy's squad, Bravo Squad, is filled with a crazy group of young men who I liked right off the bat--that band of brothers thing is real, as no one knows what they are feeling and/or thinking except 'brothers and sisters' who have walked in their shoes.
I guess the fist sentence of the review above covers it-- it explores the gaping national disconnect between the war at home and the war abroad.

I listened to this on audio and the narrator, Oliver Wyman, did an excellent job with all the voices.  I would recommend the audio version.

The movie will be released this November.

I had no idea that's what this book is about - I thought it was a football story. I've heard the military pays for those halftime show honors. The book sounds really good but I'm not sure I want to see the movie.

This sounds like a must read, Debbie. There really is a disconnect there, and it's good that someone is writing about it. I will have to look for this book.

The quote you shared really hits it on the nail, doesn't it. Thank you for sharing!