My Friday Friend Cookbook Countdown #274 and 275
My Mother-in-law's Grapefruit Shrimp Salad and Crispy potatoes.
and you know all the whys and wherefores of this countdown, right? Homemade cookbook, friends contributed, Handyman said I couldn't/wouldn't do it, I'll show him, yadda yadda yadda....
...and the rest is cookbook history!
Just remember, the countdown is not all about pretty food and food design---it's about the people and the stories.
And (the most important thing)  proving my husband wrong--and that I can and WILL make every recipe in this cookbook 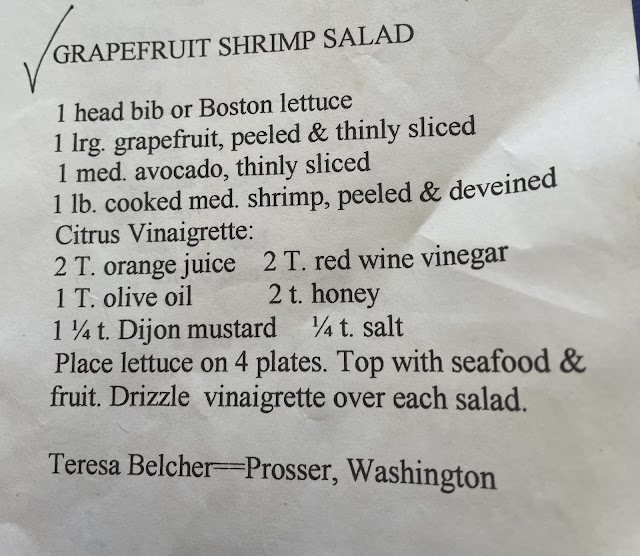 This salad was really good.  So simple and yet, so tasty.
I guess you have to like shrimp and grapefruit, but who wouldn't? 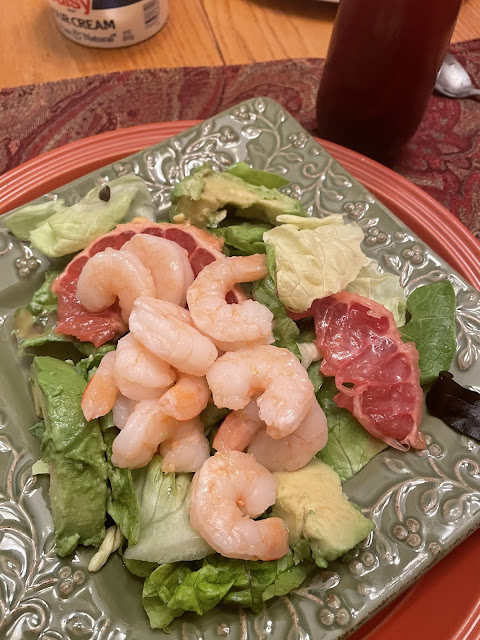 And then on to my mother-in-law's Crispy Potato Chicken!
This is good--but remember to rinse the potato before adding the oil--rinse it to get the starch out and then pat it dry before mixing it with the oil.
But you can't go wrong with chicken and potatoes. 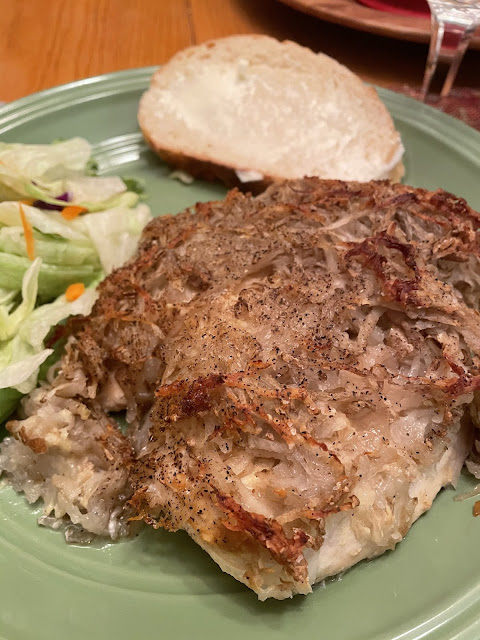 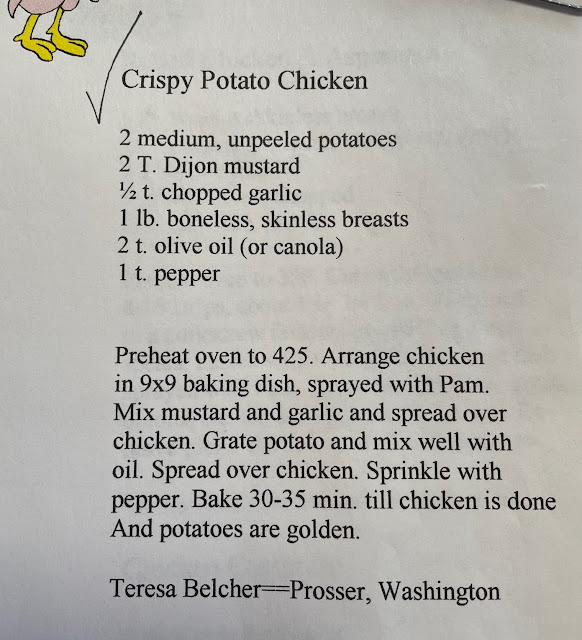 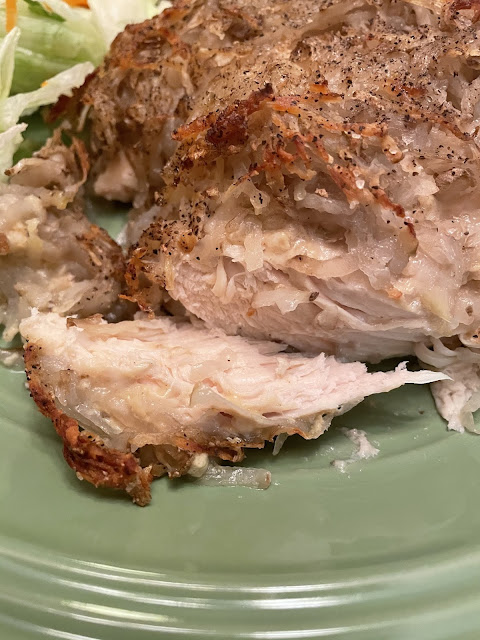 After 275 recipes made and stories told--it's hard to come up with a new one.
I've told you about what kind of cook my mother-in-law was -- fancier than my mother-- and much more precise.
One time the Handyman took me to dinner at his mom's house and she had made Lobster Thermador. It was the first time I had tasted lobster (we had crab and clams at my house growing up) and of course, I fell in love with it.
And everything else she ever made.
Okay..  Fun fact about my mother-in-law.
She went to a boarding school for a couple years in Highschool.  It was her freshman and sophomore years.
She had a tumultuous relationship with her step-father, and one night at dinner...
well, I let you tell her in her own words...
(being the keeper of family journals, letters and diaries, I know everyone's secrets!  Or at least their stories. Always written in their own hands)
I have a couple different letters here from her.  I'll start in the middle of a conversation she was telling me about her mom and stepfather,  moving to Butte, Montana.
She said in letter#1
I was going to boarding school then, at Mount Saint Mary's Academy.  I was a freshman in high school.  I went to boarding school because I didn't like Darrell.  I had money that my father had left me, along with the property.  so I just went to the lawyer who handled my brother's and my estate for us and told him my mom was going to get married to a man I didn't like and didn't want to live with them. Could the estate pay for private boarding school for me?  The lawyer took care of it and I went to boarding school.
In letter #2
Yes, I went to boarding school.  As I said, I didn't like Darrell.  One day at the dinner table, he was  yelling at me for cutting a class at school.
They had called my mom and she brought it  up at the table.
I told him not to yell at me, he wasn't my father--he wasn't even my step-father at the time.  And then I said, "I don't' think this house is big enough for the both of  us to live in!".   I was meaning that he should get out.
But he looked at me and said "When are you leaving?"
I replied "just as soon as I can."
The next morning I got in touch with my lawyer and set it up to go to boarding school.
I was a very sassy teenager. Darrell and I never liked each other.
The most interesting line was at the end of the letter, when she asked:
I wonder if my younger kids knew I went to boarding school?  I never ran around saying I went to a private boarding school. Why would I?
I left after a year and a half and did end up going to Butte with them.
It's amazing to me what little we truly know of our parents.  Do my sister-n-laws know their mother went boarding school?
I guess I'm about to find out!
Before you look at the pictures below--which are not of My mother-in-law and her stepfather Darrell-- I just want to share the complete name of my husband, the Handyman.
He was christened Richard Darrell Stone.
Go figure!?
Families are funny.
But there is nothing funny about My mother-in-law with her great grandchildren!
These are not all of her great-grandchildren, but they are MY grandchildren (and kids)
The one's taken at the Lake/cabin were about 4 years ago during cousin camp.  My sister-in-law, LeAnne brought her mom up to see everyone.  I'm so glad she did. Everyone is scattered and this might have been the only time some of them got to meet "Nona the Great" 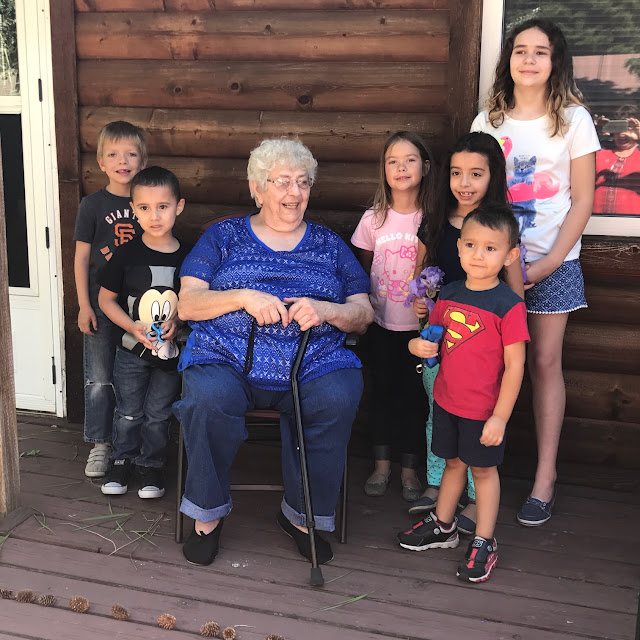 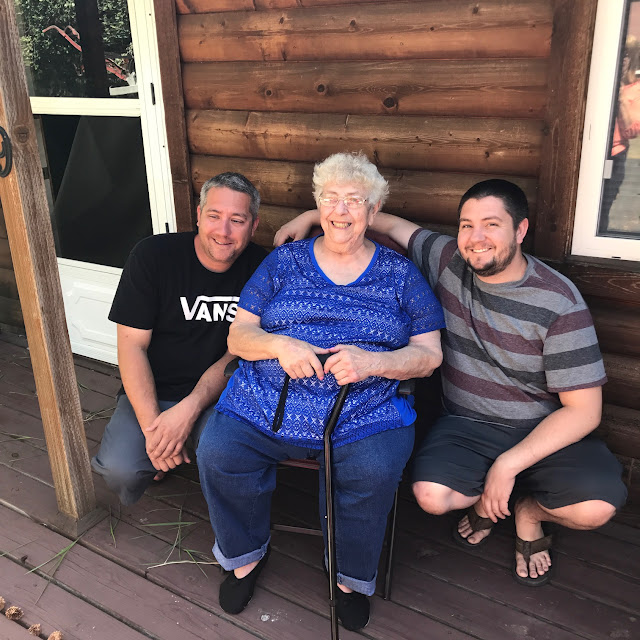 She had a hard time getting around in her later years, but she loved that we found a covered deck with shade so she could watch the kids play in the water. 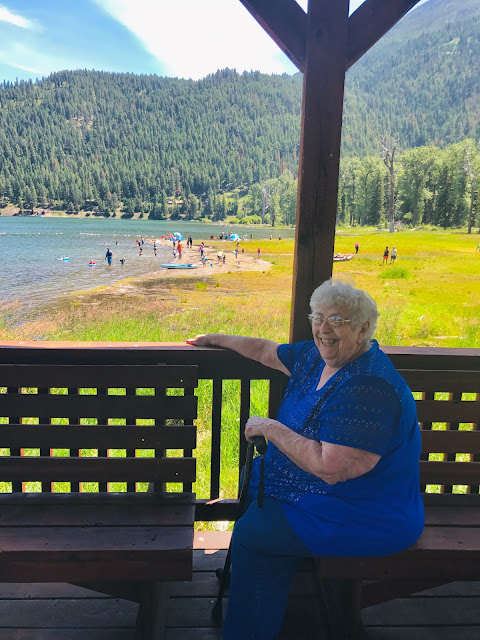 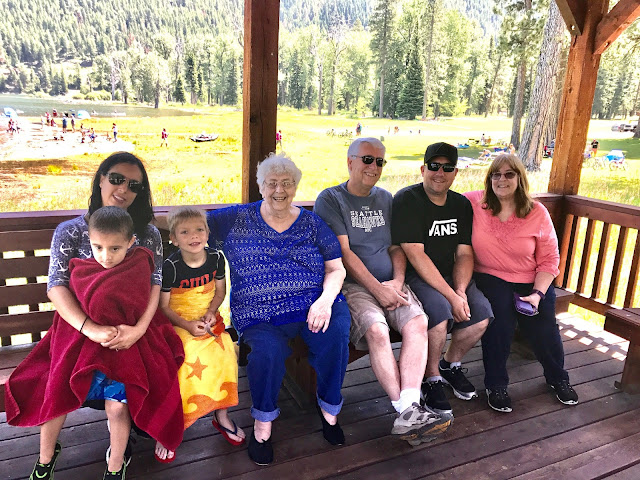 And in my backyard to meet another great-granddaughter. 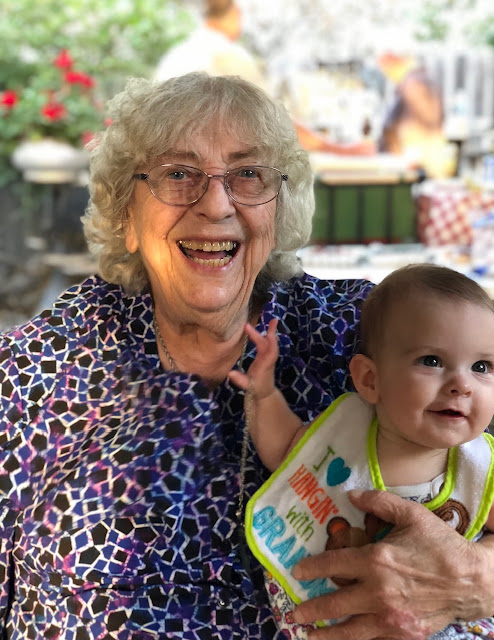 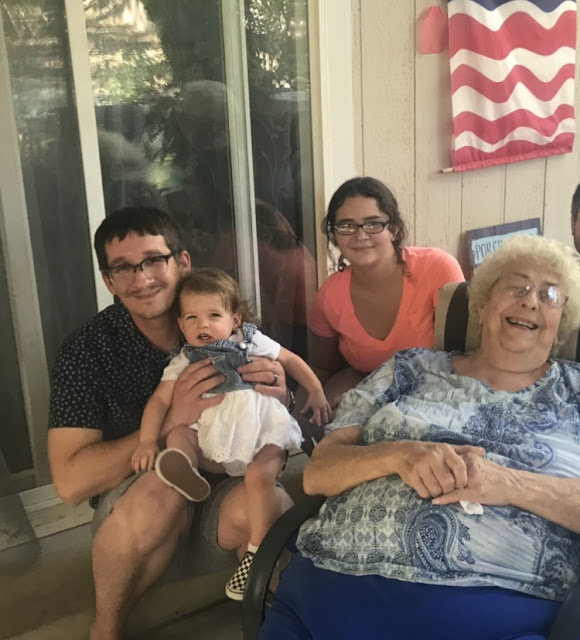