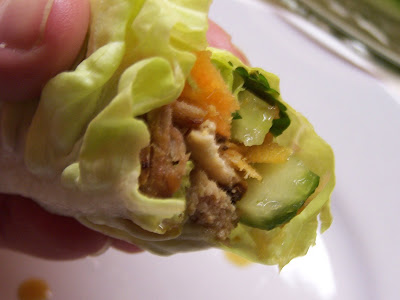 Last weekend we were invited to an "evening with friends" and we were all supposed to bring an appetizer and just as luck would have it, my friend Theda in Tualatin, Oregon had just e-mailed me this recipe for lettuce wraps. She was having them for supper with leftover pork roast. I decided to take them as my appetizer. I think I'll make them for a Superbowl party we've been invited to. There will be enough chips and dips and pizza and jello-shooters, ribs and sausage type of appetizer, but these are so good, just a little bit different and fresh. Fresh is good.
Rich (my handsome husband) thought the butter lettuce was cabbage, so he didn't try one, (he has an aversion to cabbage ??? weirdo) until we got home and I made him one. YES, I actually made him one and took it to him. He would only eat meat and potatoes if it were left to him. I have to get him out of his food box every so often. Anyway, he LIKED them.

In other news, my sister-in-law Cherrie, signed up for the 60-mile, 3-day, breast cancer walk to be held in Seattle in September. That's an ambitious undertaking. Not only do you have to walk "almost" a marathon for 3 days straight, you also have to raise $2300 for breast cancer. I am so proud of her.
I have always been the supporter. I went to New York when my friend Stella ran in the NYC marathon. I supported her (and went sightseeing and shopping while she ran), I support Cherrie and her friends, my son and his girlfriend (now wife) were on the cross-country team in high school...I supported them.
I am a great supporter!! To be fair to me... I have participated in some 5k, 10k and 12k walks. But not for quite some time.
I will be 50 years old in August. Maybe it's time I get off the supporter fence.
I printed out a training program for a 3-day, 60-mile walk. (read it while eating a cookie)
A person would really need to make a commitment....
Anyway....HOORAY FOR CHERRIE.

oh....and guess what her team name is? It's a walk for breast cancer..... Random Racks of Kindness. too funny.

Back to my lettuce wraps!
I set them up so people could make their own, and put on them what they liked. I used exactly what the recipe said, but when talking to Theda, she used the packaged broccoli slaw, which would be a great addition or substitution. You could really just use what veggies you like. They are good. Enjoy.


Wine does not hurt!! (you can see my lettuce wrap plate on the right in the back )
(and my friends were trying to set up a good picture for me...) 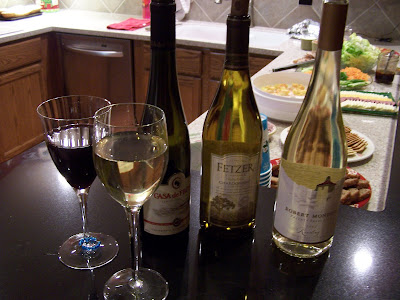 Make the ginger sauce by whisking together the soy sauce, vinegar, water, sesame oil, scallion and 1 tablespoon of the ginger. Set aside.
Heat broiler to high. Brush both sides of the pork chops with the olive oil, then sprinkle with kosher salt and the remaining ginger. Broil 2 minutes on each side. Cool and slice thinly.
Arrange the lettuce leaves on a platter and fill each with some cilantro, carrots cucumber and sliced pork.
To eat, drizzle with the ginger sauce and roll the lettuce leaves to close.
Serve with a supply of napkins.

To make ahead; make and refrigerate the dipping/ginger sauce up to 3 days ahead. Prepare the remaining ingredients and wrap separately in Ziploc bags a day in advance. 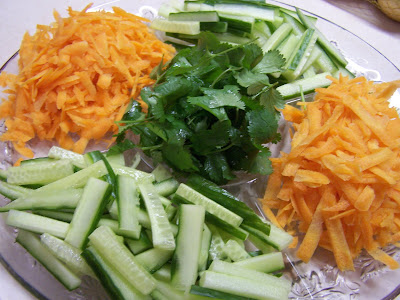 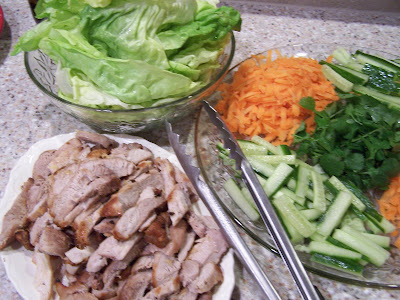 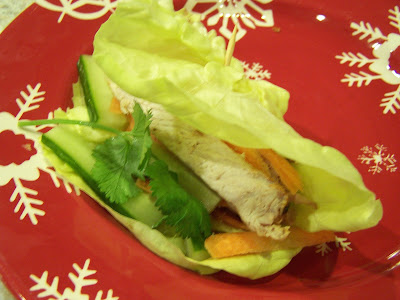 LOL, you crack me up!! What would our handsome husbands do without us to make them go "outside the box" eh?

Loving the name of your friends team!!! he he.

These look so yummy and fresh. I love "Random Racks of Kindness". Thanks so much for adding me to your blogroll!

I love you printed out the marathon info while eating a cookie. That's so what I would do.

What pretty pictures. Those sound delicious and healthy. :)

Cooking for Comfort by Jennifer said...

WOW....these are SO colorful! They're absolutely beautiful!

I love lettuce wraps! Thanks for sharing, these sound wonderful.

Hurray for your sister-in-law. My daughter did the 3 day walk and thought it was a fantastic, inspirational experience.