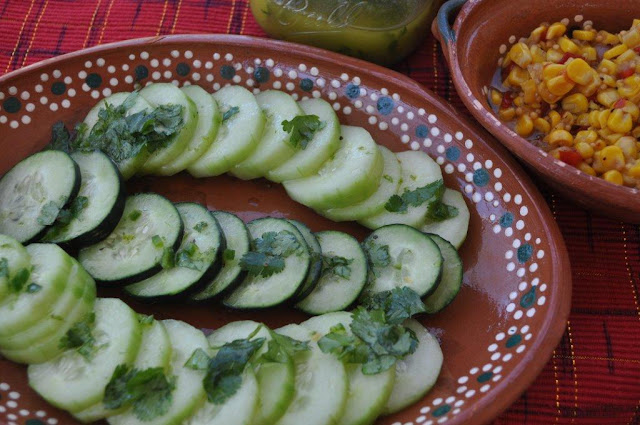 Lime Cilantro Dressing--YES IT'S A SAUCE, right?
Since our theme for I Heart Cooking Clubs,  this week is salsas and sauces, inspired by Rick Bayless,  this does qualify as a sauce... a sauce for salad or, in this case: cucumbers.
And guess what?  It's really good!

To be honest, I was looking for the fastest and most simple thing to make since just this morning, I  returned home after a  fast  3 day trip to California.   I hesitated on even participating this week, but when I found this  Lime-Cilantro Dressing in Rick Bayless's   Mexican Everyday,  I jumped on it.   It was the perfect thing!   Simple and easy.  (geez, I sould like I don't even like to cook, which is NOT the case, as you know.  In fact,  I would like to  pat myself on the back for joining in, as I have been in the middle of a kitchen redo every week so far, but guess what?  That will all be over on Tuesday!!  A sink, counter tops, a dishwasher--woo hoo.   ~smiles~   I can't wait.  )

I will definitely be making this dressing again and drizzling it on cucumbers for a great  'fresh-mex'  appetizer.  It was light and flavorful, had just the right amount of heat.

I can't wait to have a patio party fiesta and make some of these. There are so many heavy, fried, cream cheese laden   appetizers out there, and while they are all great,  this is a nice change up to something a little lighter.

I have a friend who laughs when I say something tastes fresh and cool.   (she says she would never eat anything that wasn't fresh, but you know what I mean, right?  You're not laughing at me like she does.  Are you?)   But this really does taste that way, I can't think of any other way to describe it...  Fresh and cool, but with the right amount of heat.   Which you can adjust by added or taking away the peppers.

As Rick himself says:  One of the most perfect balances of flavor--lime, cilantro and green chilies.   Mmmmmm  MMMMM  Good!   (for the sake of  full disclosure,   or in case I confuse you, with my brilliant writing style, Rick didn't say  Mmmmm MMMM Good!  I did!!)  (But it's the truth....MMMMmmmmm) 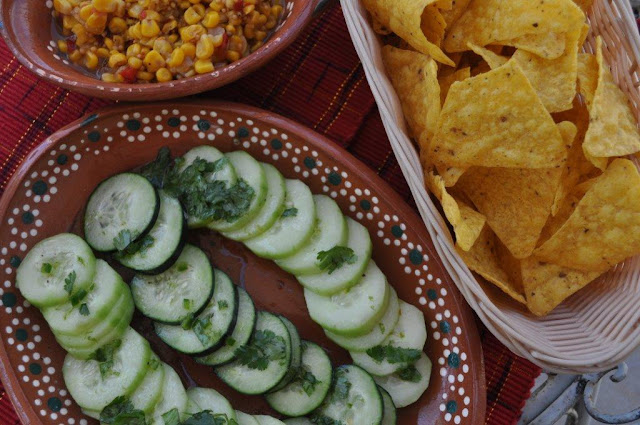 Combine the oil, lime juice, zest and cilantro and a scant teaspoon of salt in a blender, jar and blend until smooth  (I did not do this because I was in a hurry and didn't read that part.  Oh Man!  and it was still good!)
Taste and add more salt if you think it needs it, keeping in mind that dressings should be highly seasoned.
Pour into a jar and secure the lid.  Refrigerate until ready to use.
Shake well immediately before using. 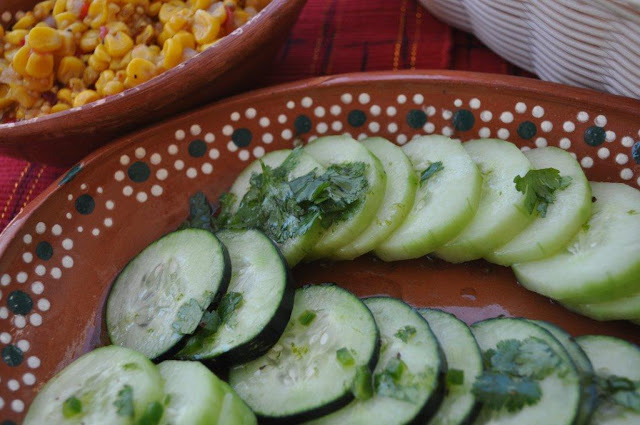 Hurry and  go  check  out the  other  Mexican  Inspired   sauces  and salsa at
I Heart  Cooking Clubs this week.

I ♥ Cooking Clubs a stress-free cooking club with a revolving roster of chefs. We feature two chefs (or cooks) a year.

From April 2nd to September 30th, we are Cooking up recipes from featured chef cookbook author - Rick Bayless.

I want to eat everything you have in that picture!

Mmm... I like everything in this dressing and it looks perfect on those cucumbers. I am tagging this one to try.

Oh yeah, I LOVE the sound of this! Fresh and cool, indeed (yup, I know whatcha mean ;P). It must feel so good to have your renovations so near to the end - congrats!

Yum! We've been on a real cucumber kick too - such a great side for spicy spreads. And perfect dressing!

This sounds so good and I kind of like that it isn't pureed, although it'd probably be good that way, too.

Love this Debbie and I don't even like cucumbers! However, that dressing...such possibilities!

Make sure you include prices of the items so you have an idea of the discount countertops. Once you have gathered a lot of ideas about your new kitchen, grab a pencil and start to jot down the costs of all the items you want to include.

I came back from the recipe. Got some cilantro & cukes today :)

I made this dressing last week and LOVED it! Next time I make this I'm going to try it with cucumbers. :)