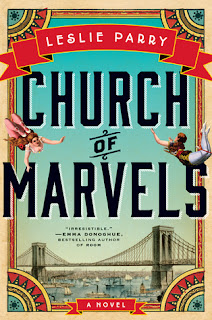 From Goodreads:
A ravishing first novel, set in vibrant, tumultuous turn-of-the-century New York City, where the lives of four outsiders become entwined, bringing irrevocable change to them all

New York, 1895. Sylvan Threadgill, a night soiler cleaning out the privies behind the tenement houses, finds an abandoned newborn baby in the muck. An orphan himself, Sylvan rescues the child, determined to find where she belongs.

Odile Church and her beautiful sister, Belle, were raised amid the applause and magical pageantry of The Church of Marvels, their mother’s spectacular Coney Island sideshow. But the Church has burnt to the ground, their mother dead in its ashes. Now Belle, the family’s star, has vanished into the bowels of Manhattan, leaving Odile alone and desperate to find her.

A young woman named Alphie awakens to find herself trapped across the river in Blackwell’s Lunatic Asylum—sure that her imprisonment is a ruse by her husband’s vile, overbearing mother. On the ward she meets another young woman of ethereal beauty who does not speak, a girl with an extraordinary talent that might save them both.

As these strangers’ lives become increasingly connected, their stories and secrets unfold. Moving from the Coney Island seashore to the tenement-studded streets of the Lower East Side, a spectacular human circus to a brutal, terrifying asylum, Church of Marvels takes readers back to turn-of-the-century New York—a city of hardship and dreams, love and loneliness, hope and danger. In magnetic, luminous prose, Leslie Parry offers a richly atmospheric vision of the past in a narrative of astonishing beauty, full of wondrous enchantments-a marvelous debut that will leave readers breathless.
From Me:
2 stars.
I feel bad....but it just didn't do it for me.
While I might have liked the story more, I just couldn't get past the narration ...and yet, I forced myself to listen to the end.
So, that must mean the story itself had some merit.
I checked out the ratings on Audible.com just now and it ranges from 4 to 2 stars--the lower ratings all mention the narration, so I suggest that you read the hardcover, because the story is not bad.﻿
at August 24, 2015

What a fun cover!

OMG! The plot synopsis has grabbed me! I'm going to red it and get back to you!