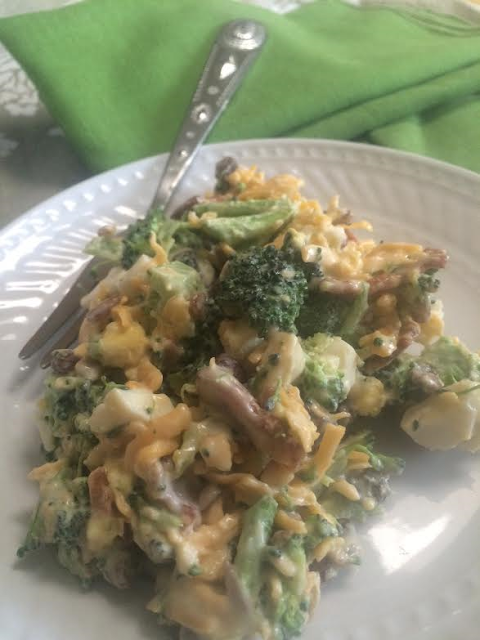 In a nutshell...
About 17 years ago, 50 of my closest friends and family, who had been on an e-mail forum with me, sent in recipes in different categories and we compiled a cookbook.
I decided to count those down!
Why?

Which brings me to recipe #133  Debbie E's Broccoli Salad 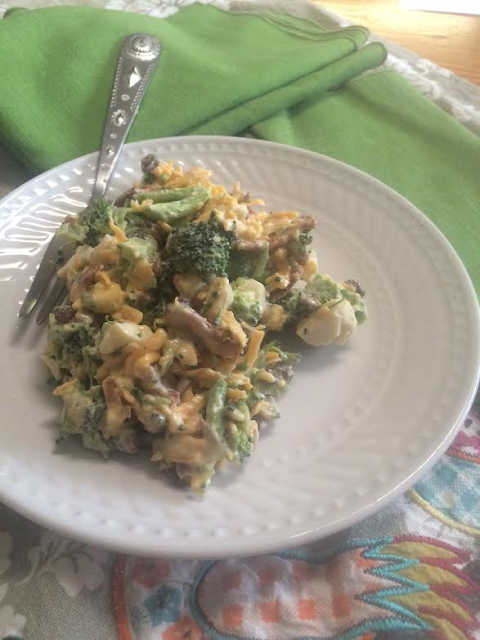 Everyone has a version of a broccoli salad (I have a few in the FF Cookbook), but this one is especially  good--it has cheese and chopped hard boiled egg in it.  (I don't think my mom's does)

Combine all of the above. 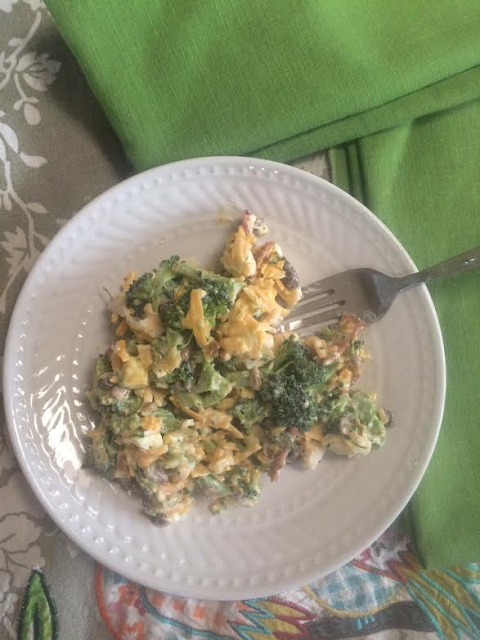 I think this is Deb E's  6th time in the countdown.
It's hard to tell, because I've tagged her on other things too--she's in my cooking club also.
You can see all the posts she's in if you click  here.

We were having coffee this morning as we do every Tuesday at 6am, and I was thinking--I don't have many pictures of the two of us together!  I thought about taking one, but-- 6am? I didn't do it.
So below are two pictures of Debbie from cooking club. She hosted our "Let's all Go to Hawaii" themed dinner, and she sported a coconut bra!
(if you want to see our Hawaiian themed cooking club post, click here!) 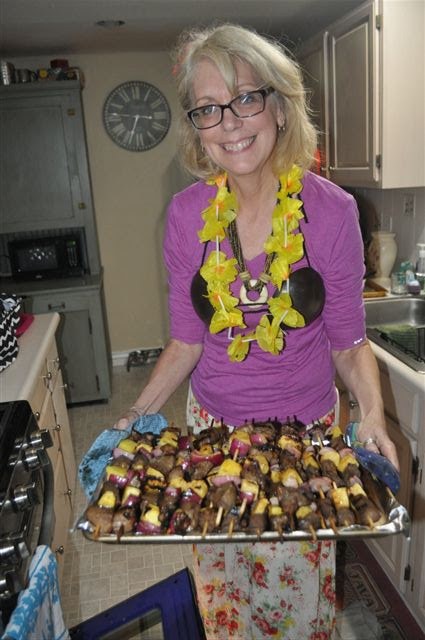 She wore it over her top, Because, you know....  Cooking club?  It would have been  hard to cook shish-ka-bobs with ONLY a coconut bra on.

Let me tell you a FUN FACT about Debbie....
She is the best meal prepper EVER. 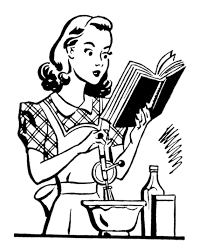 There have been many a Tuesday morning that she will chop onions, veggies, cook rice... anything to be able to have a short  cut to her meals when she gets home from work.
Unlike her dear friend, me, who usually doesn't even know what she's having and starts thinking about dinner at 4pm each day.  Nope, Debbie is a meal planner and a doer.
And she's great about using stuff up. She'll say "I had some chicken left over so I added that to the salad."
Me?  I forget about that leftover chicken until something begins to smell in my fridge.  (okay, I'm not actually that bad, but almost)
Debbie is my cooking hero!   My mentor, my muse. I once asked to borrow her recipe book and then I secretly copied all the pages.  Just so I have them!
(then, neglected to put them into a binder or notebook and they are getting  a very 'used' look to them.
see.... 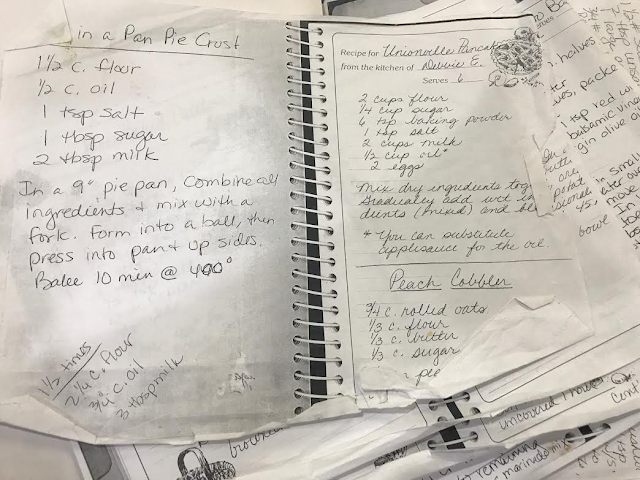 it only looks like they are in a binder, as I copied that also--just laid her cookbook/notebook flat and copied it all! )

Look!  There is Debbie at Cooking Club with Shelly, our Friday Friend who is turning all this into a real cookbook!
You can see all of her posts here--just click!
She has been known to wear a coconut bra once or twice in her life also. 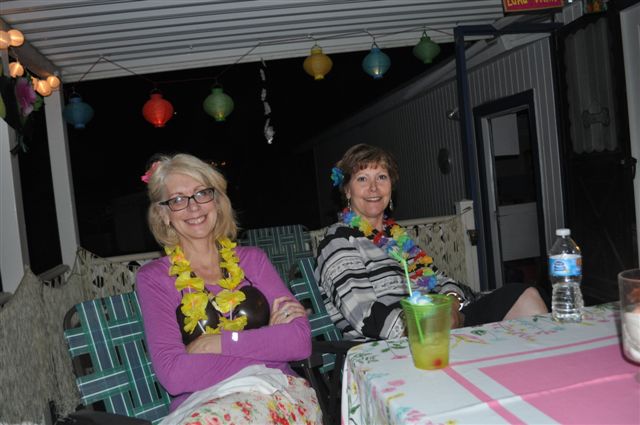 It seems as if my friends don't know how to do the coconut bra? 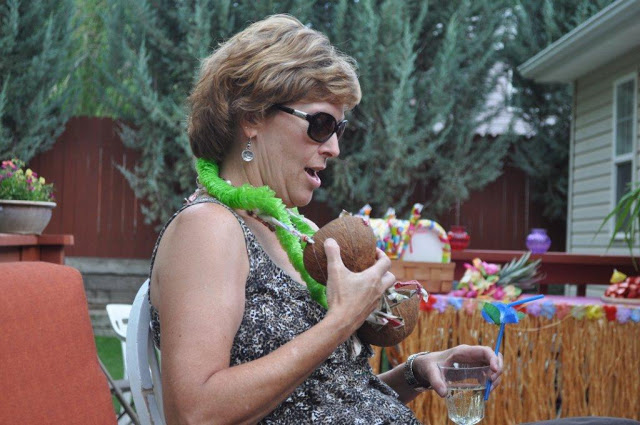 This is how you do it girls-- 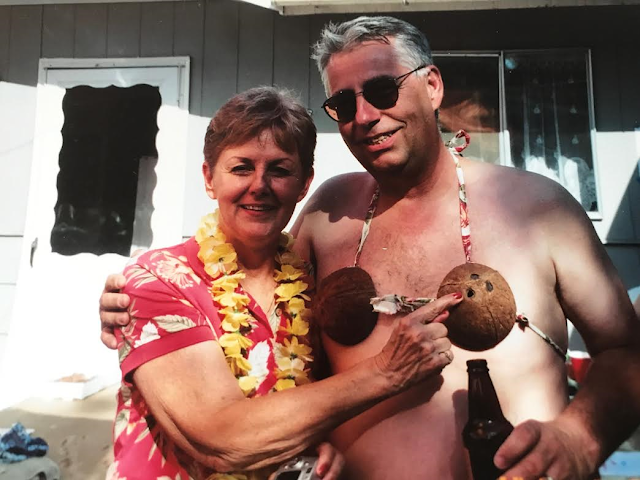 The Handyman and Barb!
I'm not sure, but I think she might be pointing out a nipple (?).
Also...isn't it amazing that I can always bring a theme around?  I mean,  Debbie E--coconut bra, with Shelly the maker of the designer cookbook, with Handyman sporting the way to wear a coconut bra fashionably, with BARB, the one who typed up all these recipes for me in the first place.
Whew.

And may I present, the Handyman and his mother. 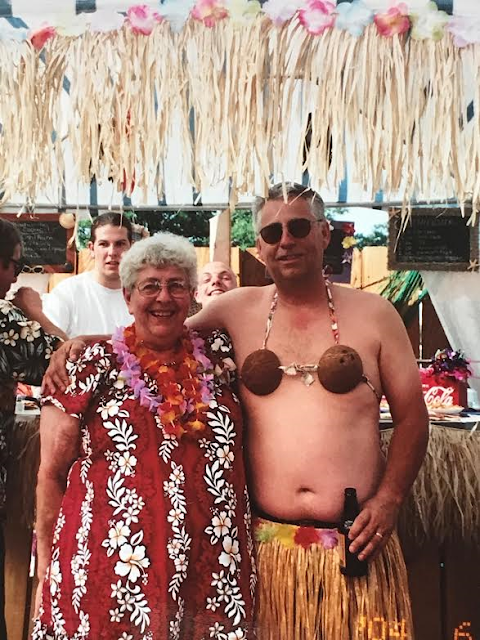 oh...look! I found a picture of me and Debbie together!
This is not an easy thing.

We are in my backyard...must have been somebody's graduation party, circa 2003. 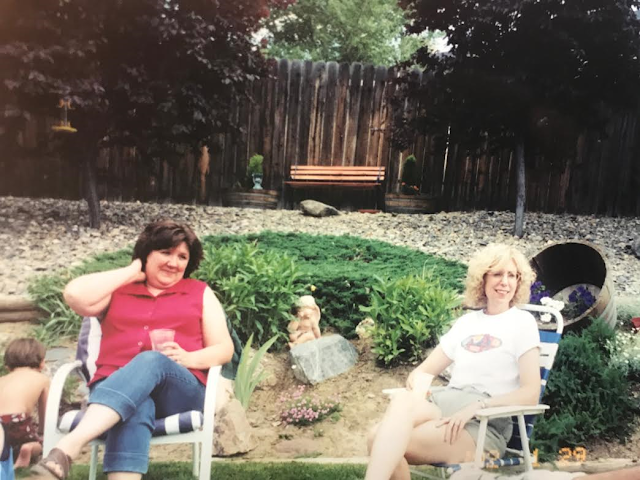 Still after all that I have 165 recipes to go!