One of the hottest trends to sweep the country in the past decade is the growth of supper clubs and other forms of cooking groups. The combination of socializing while cooking together or eating dishes made prior to meeting up has become a much-loved pastime for participants in thousands of clubs around the country.
Oh My Gosh! We are trendy!  I knew it!
9 x 13 Cooking
All we had to do for this Cooking Club get-together was to cook something in a 9x13 dish.
That's it.
That's all.
The theme was 9x13.
Look at these two!
Rebels!
Mutineers!
Non-conformists! 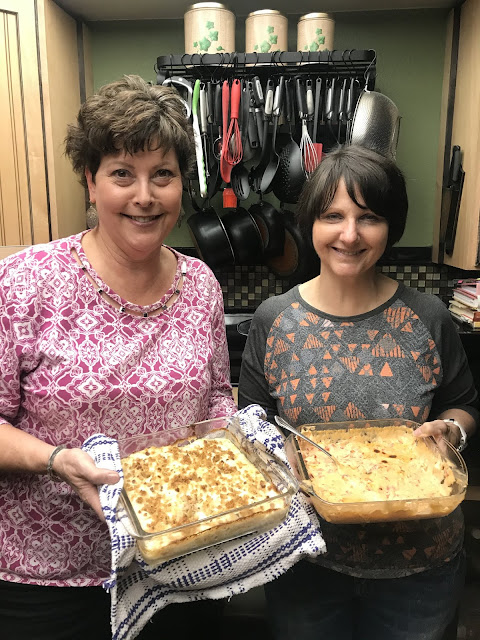 Never in any other facet of their lives are they non-rule followers.
Never!
Ever!
They 'halved' them.
They thought there would be 'too much' if they made their dishes in 9x13's.
Do you see here, the 9x13 ham and potato dish?
The 9x13 Jell-O Pretzel salad dish?
The 9x13 sourdough pretzel rolls?
And the green salad at the very end came to cooking club in a 9x13 baking dish, then transferred to the salad bowl.
There in between 9x13 pretzel/Jell-o and 9x13 transferred salad sits outlier 8x8 macaroni and cheese. 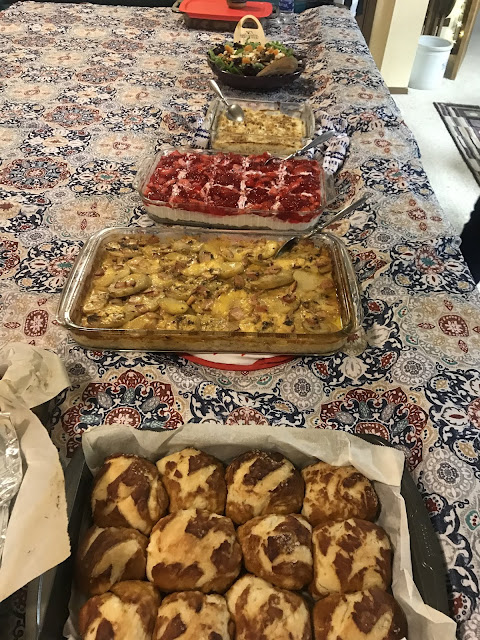 And before dinner sat loner hot cheese dip with veggies and bread. 😞 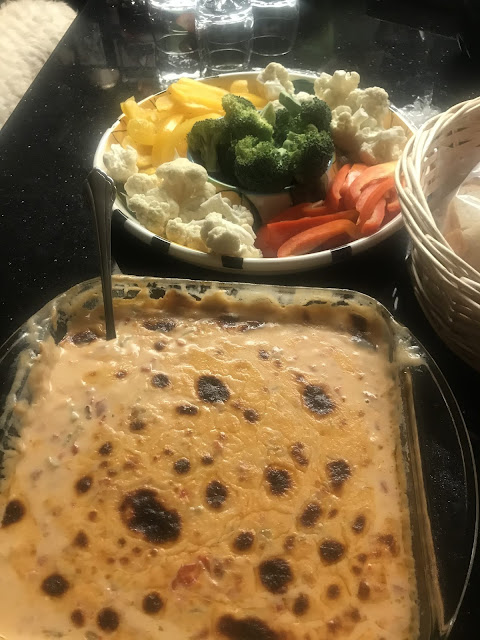 sigh
But because they were both great dishes--and we love Shelly and Gina--they have been forgiven--these radical dissenters!
And look!  Once on the plate you can't even tell it wasn't made in a 13x9 pan! 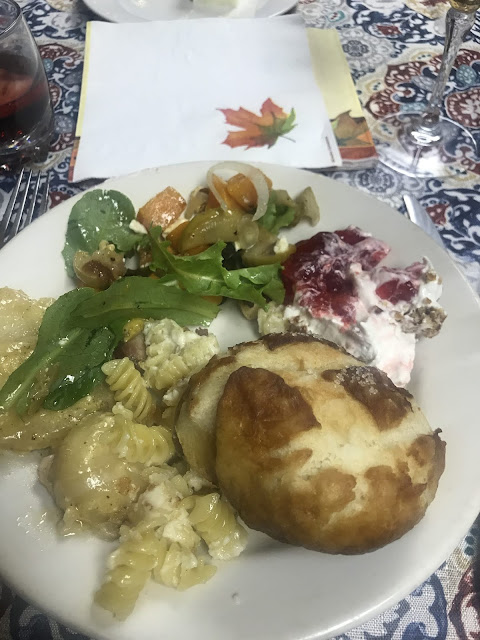 HA! I just loved calling them all those names because seriously--the most
Un-rebellious persons I have ever known!
Sally's saying "I'm staying outta this!" 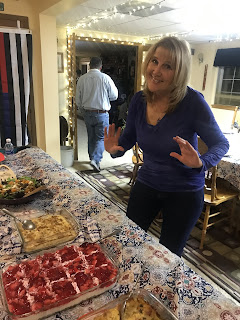 And Debbie E's thinking "What the heck--settle down Deb (me)" 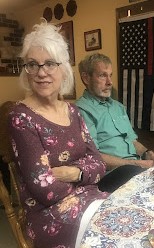 And April is happy that "all's well that ends well" 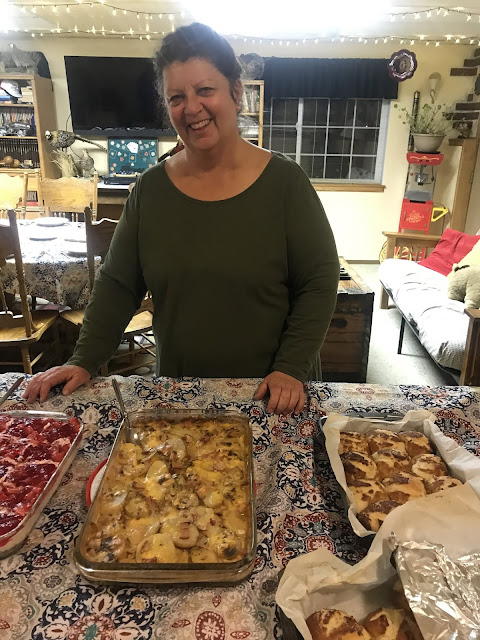 See!?  All's well that ends well!
Except--why did those three in the back coordinate their clothes?
And never told the rest of us!
WHY?! 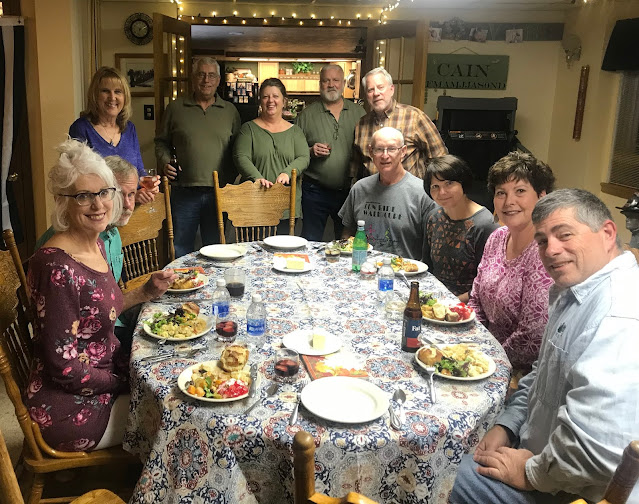 I'm never in any pictures anyway, so it didn't matter what I was wearing. 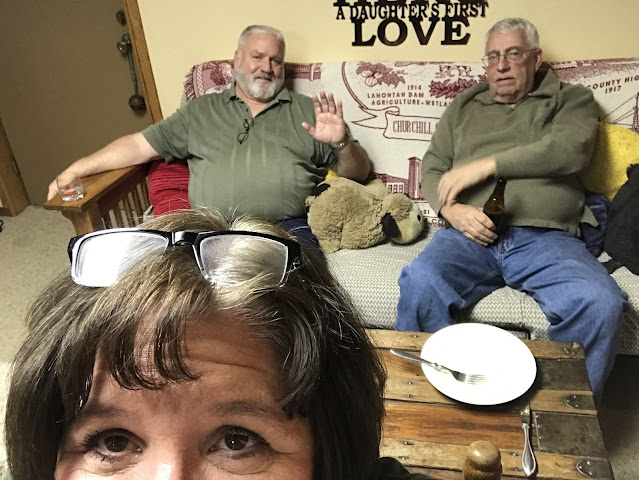 Even Gage gets more screen time than I do. 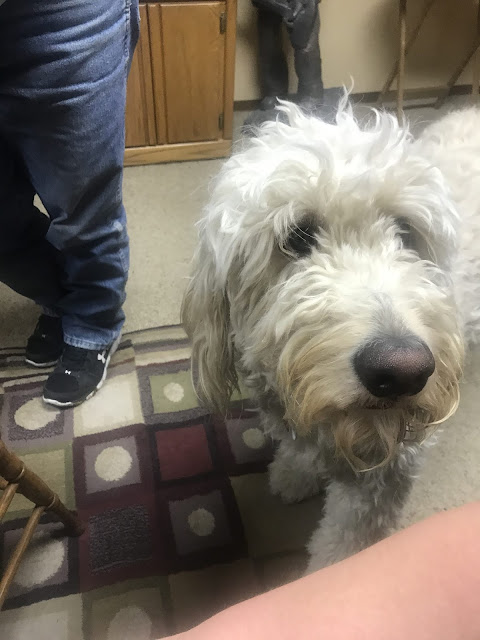 All kidding aside tho,  (because I was kidding.  I really was.   I didn't care that they disobeyed the rules of cooking club and went out on a contrary limb.  I was just happy they were there! )  we had some great food, as always, and the company of great friends and lots of laughter.  (some of the laughter was at my expense when I had a slight panic attack seeing 8x8 dishes! Sigh.  And I called them non-rule breakers?  hahahahaha!)
This might sound too corny, but  I really love my friends!
This might sound old, but what is better than good friends and good food?
Old and corny.  That's what we are!
It is said:
Of all the different relations which we indulge in, friendship is considered to be the purest of them all. Friendship is the true confluence of souls with like minded attitude that aids in seamless conversation and the best of times. It is believed that a person who doesn’t have any friend lives one of the toughest lives. 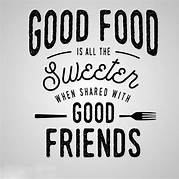 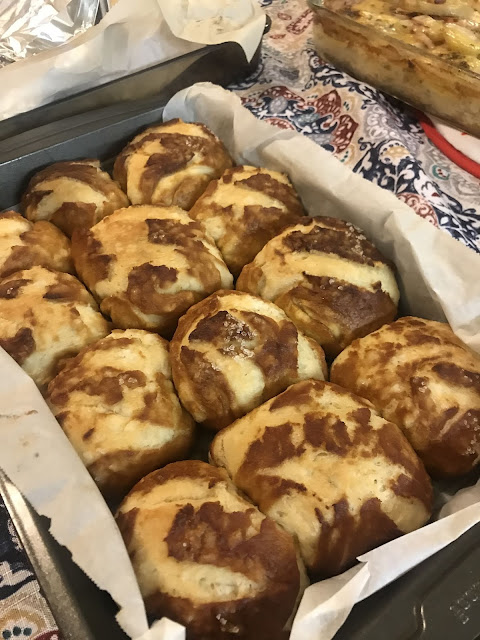 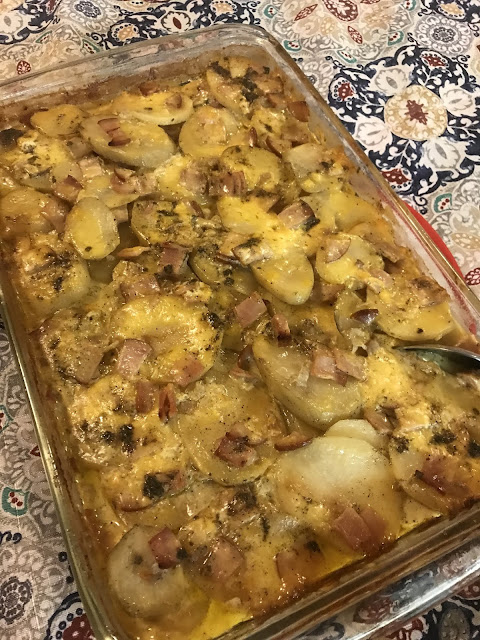 The famous Jell-O Pretzel salad.
(sometimes categorized as a dessert--it depends on who is brining it) 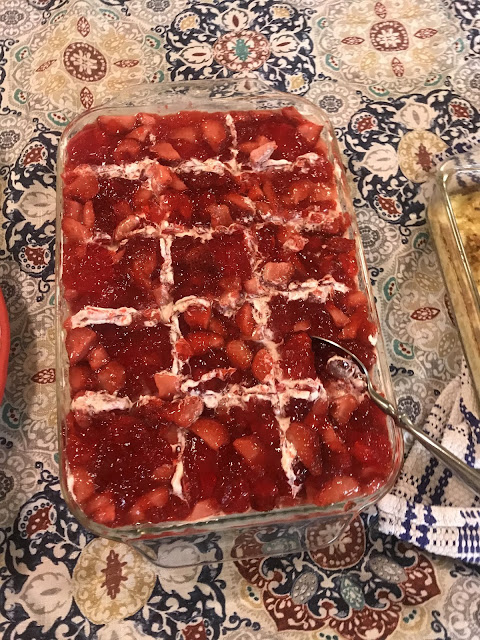 and some yummy warm bread pudding!
With caramel sauce! 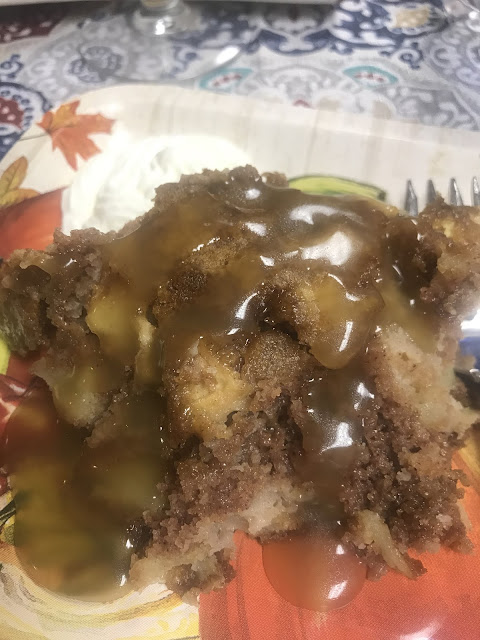 And wow---this really looks like a church pot-luck from the 1960's!
All so tasty! 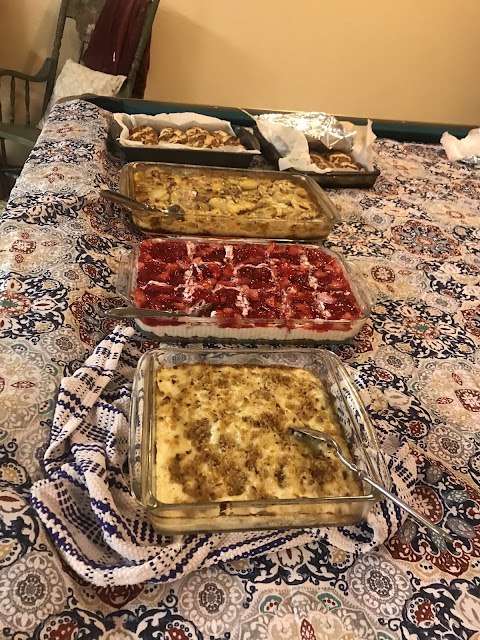 And some cute guys!

I do realize that my friends must think this--while I am snapping away photos on my phone at every cooking club!
At least my husband is. 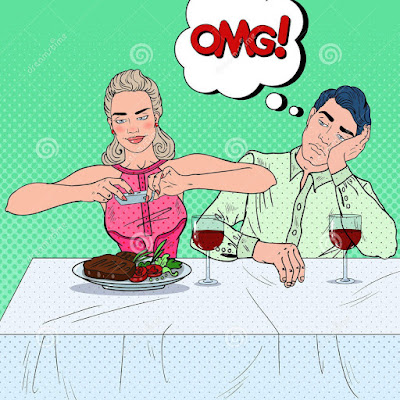 One of the hottest trends to sweep the country in the past decade is the growth of supper clubs and other forms of cooking groups. The combi... 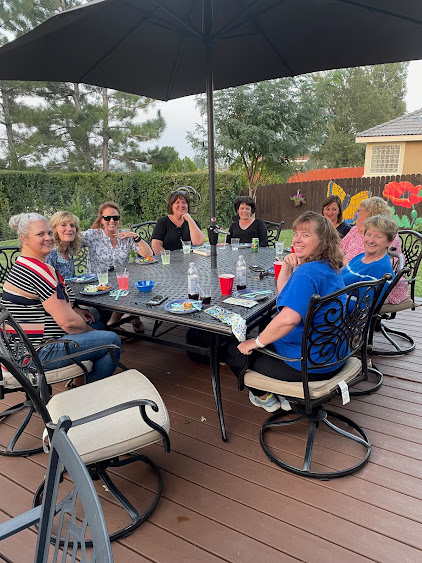 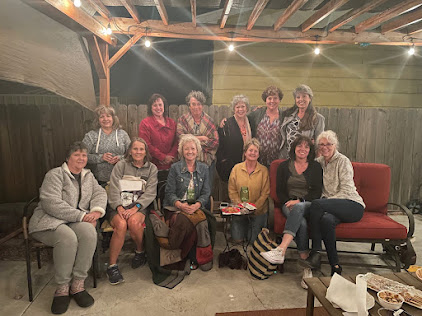 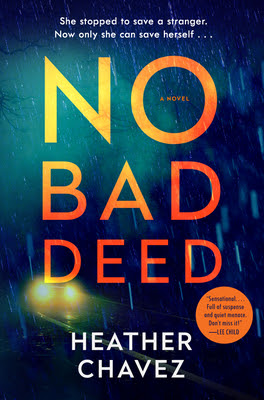 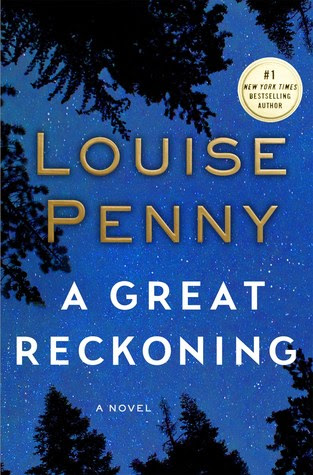 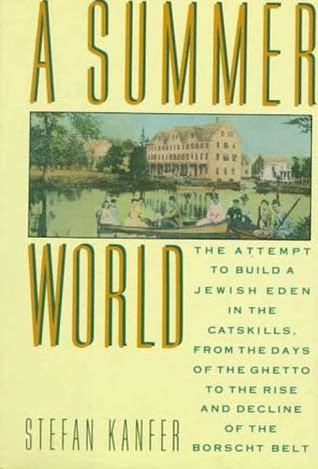 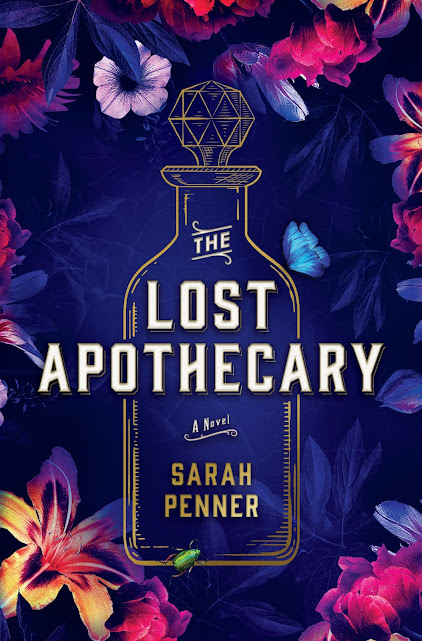 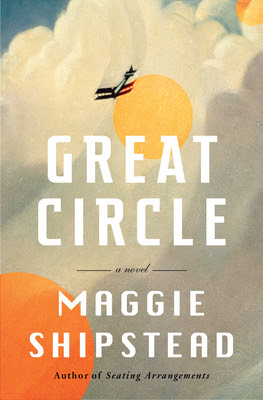 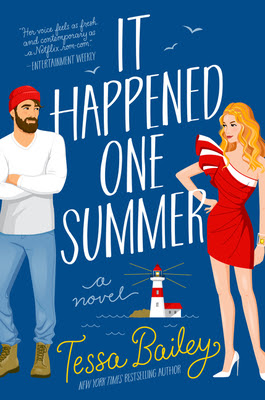 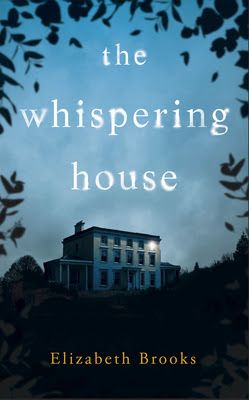